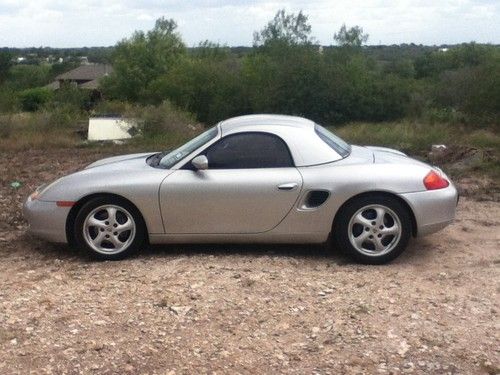 Selling my 1999 Porsche Boxster. This car has a rare hardtop (worth $2,000) that pops off and has a functional soft top underneath. Perfect for someone who owns cats and is worried they'll damage the top but still wants a convertible (that's why I bought it). Car has a few scratches and dings that are typical of a car this age. Passenger door only unlocks from the inside and the radio is missing the turning nobs but is still fully functional. Otherwise, the car's exterior and interior are in good condition for its age. Car has Automatic Transmission with Tiptronic. Mileage on it is 101,800. Car runs and drives fine, but some repairs are needed (see below). Reserve price set low to accommodate for repairs. Has a CD player, a brand new battery, an ice cold A/C, and includes original owners manual. Spoiler pops up at 60mph or can be brought up with controls inside the vehicle.

Car is drivable in current condition, and interested parties are more than welcome to come give it a test drive (by appointment only). I asked the Porsche dealership if they thought it would make it from Texas to New Mexico and back without the repairs (since I was planning a trip), and they said yes.

Kelly Blue Book value for this car in its current condition is $9,815
Legal Jargon