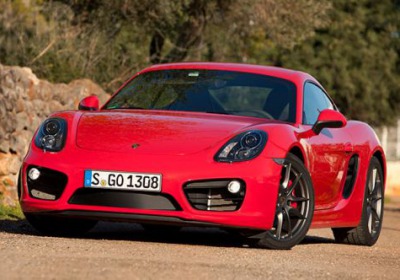 The folks over at Jalopnik have published some rather interesting images from what looks to be a presentation held inside Porsche's North American headquarters in Atlanta, GA. What these leaked photos reveal is pretty significant – details about several of the brand's upcoming launches, including GTS versions of the Boxster and Cayman, a new 911 Targa, and information about the Macan crossover that will debut at this year's Los Angeles Auto Show. Of course, none of this information has been officially verified, but it all looks and sounds pretty believable to us. So, let's dig in.

First up, Porsche will launch the Boxster and Cayman GTS models at next year's Beijing Motor Show in April. Upgrades for the GTS models will include a 15-horsepower bump, standard manual transmission (with optional dual-clutch PDK), standard Porsche Active Suspension Management (PASM) and a slightly quicker 0-60 time. Jalopnik reports that these models will cost around $75,000.

We've spied the soon-to-be-revealed Porsche Macan (pictured right) on several occasions, and these slides suggest that the small crossover will have two different types of turbo power under its hood. The Macan S will use a 3.0-liter turbocharged V6, while the Macan Turbo will use a 3.6-liter unit. Seven-speed PDK transmissions are expected to be fitted to both, and this leaked information states that the new, small Porsche will cost $52,000 and $75,000 for the S and Turbo versions, respectively.

Finally, Jalopnik was handed some information about the next-generation Porsche 911 Targa, which appears to use a pretty slick automatic sliding roof. Like previous Targa models, the new versions will be based off the Carrera 4 and 4S models, and should cost somewhere in the $100,000 to $120,000 range. Following the Macan's launch in Los Angeles, the 911 Targa will likely debut at the Detroit Auto Show in January.

Again, we can't confirm the validity of any of the photos, but really, none of this information is too far-fetched, and it jibes with some of the scuttlebutt we've been privy to previously. Head over to Jalopnik to check out everything for yourself.