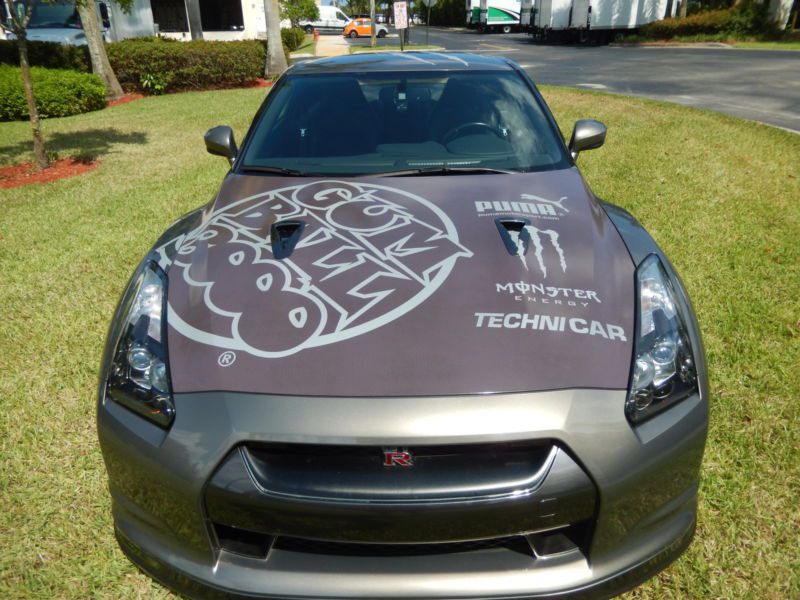 This GT-R, car #67, was the first GT-R to run and finish the Gumball 3000. That event took place in May 2009 from
L.A. to Miami.
Preserving that special part of the car’s history, this GT-R still retains the Gumball 3000 event decals and the
custom electronics that were installed to avoid the “state revenue collectors” during the “rally.”
Only three teams received awards in 2009. This GT-R and the drivers, were awarded “Best Navigators.” A
laser-engraved “Gumball 3000” Macbook 5,1 was presented to us at the award ceremony. The Gumball 3000 Macbook,
along with some new, unworn Gumball 3000 apparel (T-shirts and baseball caps), is included in the purchase of this
GT-R.
Here are what I'd consider to be the highlights of this car:
One owner - 2009 Nissan GT-R Premium.
Titanium over Black. Mint condition!
Purchased new in September 2008. Never abused. Never “launched.”
Always stored in climate controlled facility.
Clear title. No accidents. No curb rash on the wheels. No repaints.
Original window sticker in perfect condition, owner’s manual, warranty books and keys.
Always serviced at the Nissan dealer by trained GT-R technicians. Have all service receipts.
New Bridgestone run flat tires – with a couple hundred miles on them.
Original brakes (and dealer says the car doesn’t need new ones yet - how's that for a pampered life?)
100% stock, unmodified drivetrain
OEM JDM clear front-side marker lights – installed (original amber lights included)
OEM JDM clear rear market lights – included (not installed – didn’t want to remove rear bumper)
17,552 miles on the odometer (3,500 of those miles were racked up during the May 2009 Gumball 3000 rally
event).
The car’s custom electronics package (which helped to avoid even a single traffic citation - since new), was
installed by the artisans at Technicar in West Palm Beach, and includes:
Escort Passport 9500ci, surgically cut into rear-view mirror bezel and dash (see picture)
Front and rear laser jammers
Brake light flasher & disable switch
GPS-computer inhibit switch (allows co-pilot to update NAV while car in motion)
Remote CB radio with detachable antenna
Uniden Police band scanner
Upgraded iPod interface
This GT-R has been part of the Styles Collection from new and is currently on display at our automotive museum in
South Florida.
We're die-hard collector of ‘67-‘73 American and 1990’s Japanese muscle and would entertain trades. Right now
we are looking for a low-mileage, unmodified ‘93-‘98 MKIV Supra Turbo 6-speed and a ’97-’05 first-gen Acura
NSX.