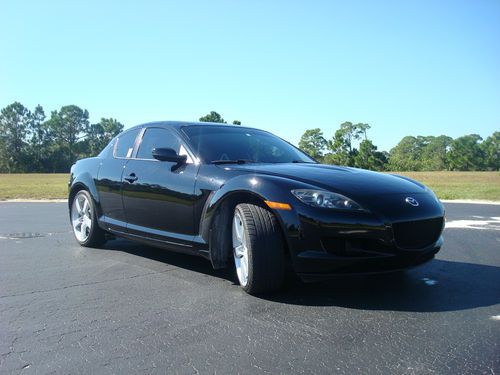 Selling my 2007 RX8 Mazda Sport sports car, milage just turn 30,000 miles. The car is very sporty 4 seater, great handling and very peppy with a 6 Speed Manuel Transmission and almost new Tires, only about 5k since they were put on. The car has been serviced at Dyer Mazda in Vero since I've owned it, with oil changes every 3 thousand miles. If interested the car can be seen in St. Lucie County, the car is very reliable with many good miles left in her.

Be glad to answer any questions about the car and more and better pictures will be added as soon as I can
I've changed the pictures and I'm going to download more pictures to my PhotoBucket wear you can look at all the angles I took pictures of.  I did try to show the hail damage as much as I could, but hard to get to show in the pictures.
OK one last Edit, you can view more pictures at the web address below, if you need to see more or have questions I'll be glad to answer or send.  Also anyone is welcome to come and see the car.
You can call anytime to verify any of the info on the car, but not interested in dealer listing agents, this is a personal sale and a good deal for a private party only.
772-461-8822
For those unsure of what I mean by sold on first bid, I'm agreeing that the car is sold with the first Bid of $10,500 and goes of course to the highest Bidder, I hope that makes it clearer.  If you have any questions please write or call before bidding.  Thank you
http://s440.beta.photobucket.com/user/772louis/media/RX8/DSC02195.jpg.html?sort=3&o=0

Cold weather might be starting to grip parts of Canada, but our neighbors to the north are going to be able to drive their 2015 Mazda cars and utilities from Vancouver to Montreal with a little more peace of mind. That's because Mazda Canada is instituting an unlimited mileage warranty for its new models.
The updated plan starts with all 2015 model year vehicles (even those already sold), and the scheme simply removes that distance limit on everything but the emissions defect coverage. That means that the Mazdas have one year of service adjustments, three years of new vehicle coverage, five years on the powertrain, seven years against corrosion and three years of roadside assistance for as many kilometers as the owner drives.
The change removes at least one, tiny piece of anxiety about buying a new vehicle because it's easy to know when the coverage ends. "By offering our customers an Unlimited Mileage Warranty, we believe it will enhance their ownership experience by alleviating concerns such as kilometre limitations, repair costs and resale value," Kory Koreeda, president of Mazda Canada, in the automaker's announcement.