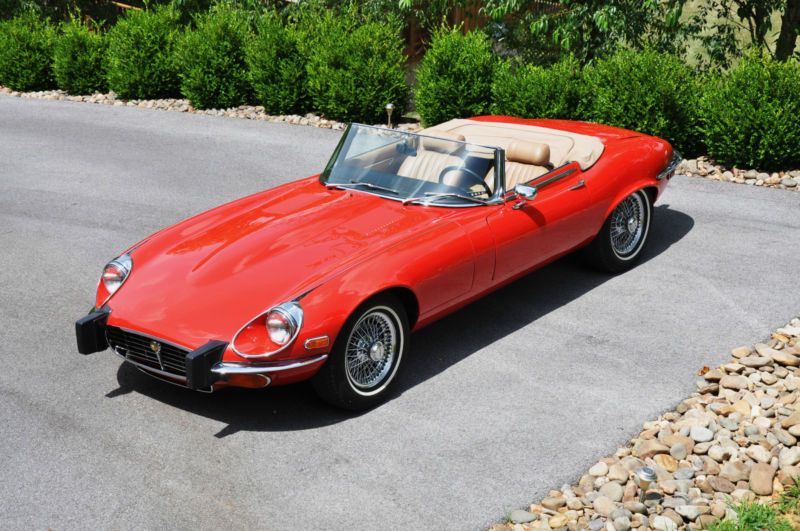 Available here is a 1974 Jaguar XKE V-12 roadster. It is an excellent vehicle that drives out as well as it shows.
A very flashy color combination, along with the smooth power of the V-12 and 4-speed transmission, makes this
Jaguar a pleasure to drive.  BODY: Bright red exterior paint that is in wonderful condition. The car was purchased
out of the southern California area where I believe the car was painted. Estimated that the car was painted about
15 years ago but that is unknown. The chrome and trim is in excellent condition and shows well. Lights, glass, and
rear window are all in very nice shape. The body is very solid, there is no rust that I am aware of on the car.
Also, no known accidents. With all this being said, this is NOT a 100 point car. The restoration was believed to be
15-20 years ago but is undocumented, therefore I do not know the age of all areas of the car. There is some wear on
the car in certain areas. I've tried to show all those areas in the pictures I have. Several additional pictures
that I can send to you. INTERIOR: Beautiful tan interior in the car. Seats are very nice and do not sag. Carpets
are in good shape and fit well. Gauges all work and the dash is in excellent condition. Very nice convertible top
on the car with a solid and clear plastic window. Car has spare tire, tools, jack,hammer for knock offs.
Engine pulls strong and runs out well. The clutch feels great and
transmission shifts up and down with ease as it should. There is an updated ignition box that was installed by
previous owner. Makes the car very reliable.  Headers through the exhaust is solid and sounds wonderful.