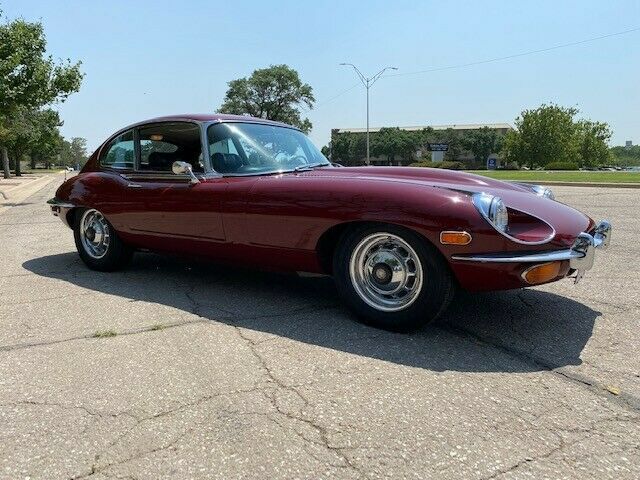 A great example of the 1969 Series II XKE. I have owned this car since 2012, it has been garage kept and well
maintained. I have put about 10,000 miles on it since I purchased it nine years ago, it is great fun to drive and
has always been dependable.

Interior and special options- This particular example is a four speed
manual, a rare option for 2+2s, and sports special ordered factory chrome plated steel wheels (wire wheels were
standard) as well as a Phillips FM radio which still works. All instruments, lights, and gauges work as they should
with the exception of the clock. The upholstery and carpets are 100% original and are starting to show their age a
bit. while clean, the carpets are a bit worn. the driver's seat has some cracking but is still holding together
on the whole. the passenger's seat and rear seats have seen very little use, and as such are in great shape
with the exception of a small stain on the rear seat which was present when I purchased the car. The trunk area is
very clean with no issues to note, as is the dash, with no cracks or warping. The headliner is in astonishingly
good condition with no signs of delamination from the roof. Exterior- Earlier in this car's life it had been a
concourse queen,

The paint is older but is still looking very good with no sun
damage and minimal oxidation. there are odd chips here and there but nothing severe, most notable is the one on the
nose of the hood which happened recently, I wanted to get it repaired but my body shop of choice has a two year
waiting list for new projects, and I just couldn't wait that long to get the car sold. Unfortunately a few
months ago it suffered a full delamination of the driver's side rear tire, which caused numerous small chips on
the rear quarter, it isn't glaring but it will definitely need to be addressed at some point. There is
absolutely zero rust in this car. Mechanical- I have had very few mechanical issues with this car over the years.
It did just receive a new brake master cylinder, plugs, plug wires, and distributor cap last year and the clutch
slave cylinder was replaced a few years ago. There is no smoke on startup and no noticeable oil consumption. It has
been known to drip a little oil if it sits without running for a while, which is normal. The dual electric cooling
fans work as they should, and the carburetors have never been temperamental, which is a blessing. It does have a
factory R12 air conditioning system but it is in need of a charge and probably re-sealing, the blower fan works
fine. The tires are brand new with less than 200 miles on them

We were a more than a little jealous when designer Ian Callum revealed his Jaguar Mark 2 restomod that he commissioned from Classic Motor Cars. It turns out that we weren't the only ones that dug it - the reaction was so great that CMC got Callum's permission to create a limited run of them for customers. Although, with prices quoted between £350,000 and £375,000 ($572,000 - $613,000), we doubt Ian needs to worry about seeing a copy of his creation pass him too soon.
"Within hours we had received calls from people all over the globe asking if they could buy one," said Peter Neumark, Chairman of CMC in the latest announcement. The reaction came as a surprise to Callum, who said he designed the car entirely to his own specifications and actually wasn't sure if people would like it.
Among Callum's many changes are new bumpers, wider front fenders with functional louvers and less chrome trim. Under the hood is a 4.3-liter six-cylinder fitted with two SU carbs putting out around 260 horsepower and 280 pound-feet of torque. It should be a much better driver too, with a completely re-engineered independent rear suspension, adjustable dampers at all four corners, improved brakes and a new rack and pinion steering system designed by CMC with electric assist.