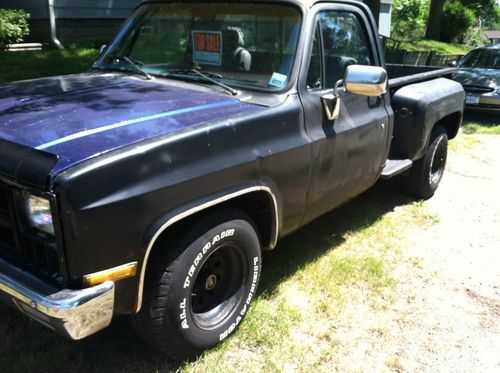 Condition: UsedA vehicle is considered used if it has been registered and issued a title. Used vehicles have had at least one previous owner. The condition of the exterior, interior and engine can vary depending on the vehicle's history. See the seller's listing for full details and description of any imperfections.Seller Notes:"this truck is an excellent running fully rebuilt chevy v8 305. has rust on it but it is a perfect work truck and daily driver. very dependable."

1982 GMC sierra 1500, stepside 8 ft bed. This truck has a  totally rebuilt chevy 305 motor in it. engine runs fantastic, no ticks , knocks, and burns no oil, everything in it is new. it has about 3,000 miles on it now since I had it rebuilt . transmission is also rebuilt, tires are nice and have a ton of life on them still, has rust and scratches but that is why I call it a "work truck !  it also has a new gas tank and fuel line, good brakes too. Alpine cd player .  power steering,  power brakes,  sliding rear window,  heater works good,  good exhaust.  leather seats that are power and have a lot of settings on the seats, but they need to be hooked up to power.  this is just a very dependable chevy truck . it does have some oil around the valve cover so you'll need a couple gaskets if you want it bone dry.  I am just selling it to pay bills. wife lost her job due to downsizing. I hope i have answered about everything I can think of.  I will be happy to answer any questions you may have.  thanks a lot for looking and happy bidding.  :)