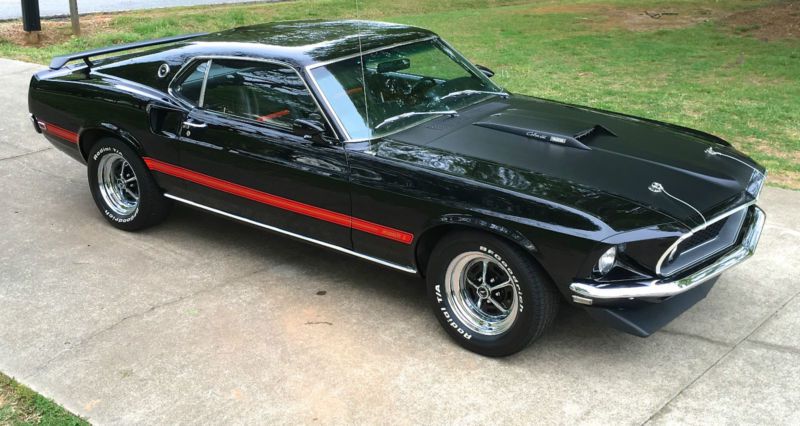 Please email me with any questions or requests for additional pics or something specific at: nicholasnsshanholtzer@lifefriend.com .

This **Rust Free** 1969 Mustang Mach1 turns heads and is a blast to drive. This car is very tight and actually
drives as good as it looks. This car has been maintained to a high standard since its restoration years ago. This
high quality car was restored using only Ford Factory Parts (all chrome and trim is Ford oem). The Raven Black
paint is slick, straight, and shows extremely well. The interior is in excellent shape (seats, carpet, and
headliner almost look new). This car left the factory as a S-code big block 390 Mach 1. The current Motor consists
of the following: 1969 428 Cobra Jet Block dated January 22nd 1969, 1UB Cobra Jet Crankshaft, Cobra jet Rods,
Forged Pistons, a set of worked 427 medium Riser heads with adjustable rockers, PI Ford Aluminum intake port
matched to the 427 heads, Holley Carb, new Headers, Custom Cam, the list goes on… This 428 Cobra Jet runs very
strong and has been balanced (mild mannered until you roll into full throttle…). The C6 automatic transmission
shifts smooth. This Mach1 has disc brakes in the front and drums in the rear. The car handles and brakes
extremely well. The Magnum 500 wheels and BFG tires are like new. The Factory Style Air Condition has been
converted to R134a. This car sold new at Mc Dougald Motors in Claxton, Georgia. The car was scheduled for
production on 11-13-68 but was actually produced on 11-11-68 two days ahead of schedule. If your in the market for
a unique muscle car with class, don't miss this opportunity to own this High Quality 1969 Mach 1 Mustang.