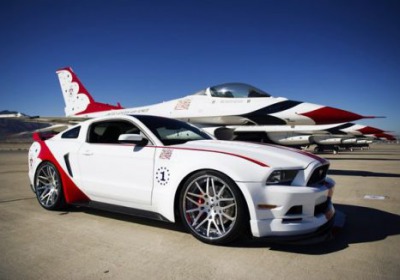 For the last six years, Ford has created a special version of the Mustang with a military aviation theme, and then donated the car to the Experimental Aircraft Association (EAA) to be auctioned off at the annual AirVenture event, also known as The World's Greatest Aviation Celebration. The money raised goes to the EAA Young Eagles program to inspire the "aviation pioneers of tomorrow," and this year's 2014 Ford Mustang GT US Air Force Thunderbirds Edition was won with a final bid of $398,000.


Celebrating 60 years of the USAF's Thunderbirds, this Mustang GT is the only one of its kind with a paint job matching the Thunderbirds' F-16 Falcon jets and some Ford Racing performance added on for good measure. Including this car, Ford has helped raise around $2.3 million for the charity with the biggest auction price coming from the first year of the program, the F-22 Raptor-inspired Mustang AV8R from 2008, which sold for $500,000.

See also: Ford's official Euro aftermarket partner Mountune coming to US, How that awesome Mustang R/C car chase vid was made, Ford adds third shift at F-150 plant to keep up with demand.