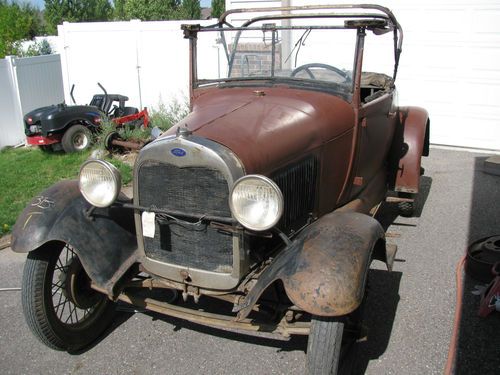 Condition: UsedA vehicle is considered used if it has been registered and issued a title. Used vehicles have had at least one previous owner. The condition of the exterior, interior and engine can vary depending on the vehicle's history. See the seller's listing for full details and description of any imperfections.Seller Notes:"unrestored, missing front bumper. cracked head, engine is complete but not running"

This is a clean original car with excellent sheet metal.  It has not been restored or or modified.  It was put in storage in 1964 and taken out of storage when the owner died in 2011. There is a small rust spot in the right quarter panel and there is rust in the rear wheel wells. Please view the pictures closely as they tell the story. You can contact me at  vandel@cableone.net or you can call me at 208 528 2850.  I have a clear title in my name.  I can deliver locally.You welcome to view the car, please call and make arrangements.   The car is also for sale locally, therefore I reserve the right to cancel this ebay  sale.