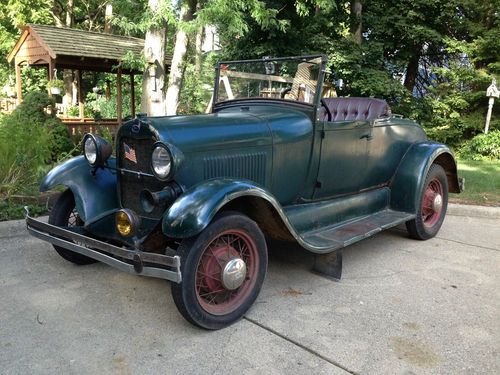 This is a 1929 Ford Model A Roadster, It is in driving condition, runs well and stops well. It has been in storage for over 60 years. It was never restored, It was painted green and red in the 40s by a man who came home from service after WWII. It has the typical scratches and dings of an old unrestored car. It is very solid with just a few spots of rust. He also painted the interior red along with the firewall to snap it up a bit. I did take the oil pan and the head off and found it had been rebuilt 60 over and still had white grease on the crank and almost no carbon on the pistons. I put a new head gasket on and that was that! The drive train is all original and has just been maintained through the years. It was a trunk model but the owner flipped the lid down and brazed it in place as a rumble seat. I cut off the welds and turned it back to a trunk. The interior door panels and kick panels were made of sheet metal and were well done for 60 years ago. Other than that it is the way it was fixed up back in the 40s. The headlight and taillight wiring needs to be redone as it is still the old cloth covered type. The rims are 17 inch 1934 models. The exhaust is straight with no muffler, it exits just in front of the rear tire under the running board, it has a nice throaty sound. I did put a new battery in it last year. The patina on this car is just great. The car could be left as is and driven. It is a true period piece, it is very hard to find a roadster that has been left alone all these years! The old homestead is sold so its time to go to a new caretaker as I just don't have room to keep it anymore.