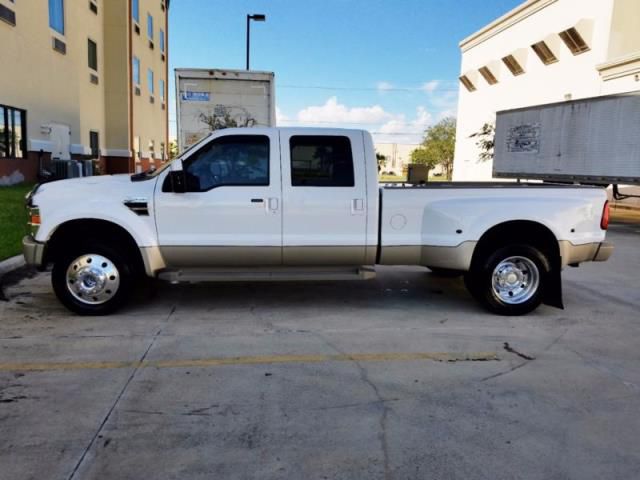 For sale is a clean 2008 Ford F-450 King Ranch. The truck has been well maintained and never smoked in. The leather is in excellent condition with no rips or tears as well. There is no rust on the frame/floor panels. The motor was replaced by Ford October 22, 2015 and has a 2 year UNLIMITED MILE warranty. The service manager at a Ford dealer told me that as long as the chip was removed(pcm flashed back to stock) and the exhaust components were put back BEFORE bringing the truck in for service the warranty would remain valid. The coolant filter and airdog fuel pump were installed after the new motor was installed. The truck has alot of power, drives smooth and has never been abused. The exhaust components that were removed will be included with the truck. The truck is currently in Harlingen, TX. If you have any questions or would like more pictures please ask.*Mileage will increase slightly as its still being driven until sold**Bumper pull hitch not included 88,326 miles (11,908 miles on new motor)4.88 Limited Slip Axle4x4 Auto Locking HubsHeated Front SeatsPower MirrorsPower Moon RoofPower Sliding Rear WindowPower Entry *Addons*H&S MiniMaxx Tuner Dash MountedAir Dog II-4G 165GPH Fuel PumpaFe Stage II Cold Air Intake With Air ScoopDiesel Site Coolant Filter90 Gallon RDS Aluminum Fuel Tank Dual Viair 480c Air Compressors2.5 Gallon Air TankDraw-Tite UnderBed Gooseneck HitchAir Lift LoadLifter 5000 Ultimate With Auto Leveling SensorPioneer AVIC-8100NEX With SirusXM Tuner Installed1200W Power InverterAVS Bugflector IIEGR In-Channel Window VisorsHusky Molded Floor LinersMud FlapsSmoked LED Cab Lights/Mirror Lights/Side Marker LightsBright White LED Reverse Lights/Cargo Lights/Interior Lights
For more details eMail me : harrisonendres5w1@yahoo.com