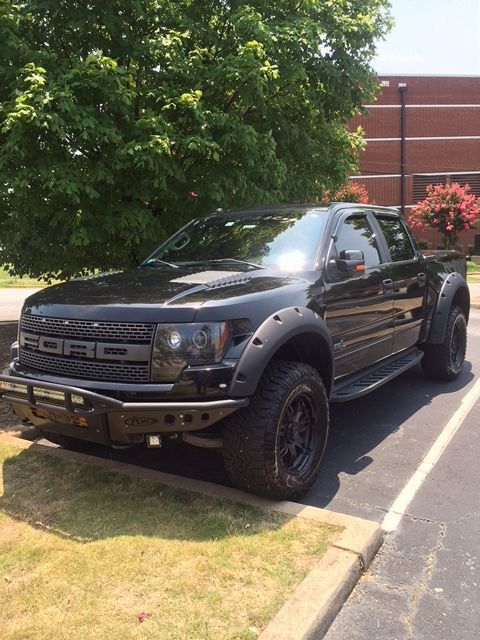 I BOUGHT THIS TRUCK NEW AND HAVE KEPT IT SERVICED PER HENNESSEY'S
RECOMMENDATIONS. I HAVE ALL RECIEPTS AND KEPT LOG OF ALL WORK DONE ON THE TRUCK
FROM DAY 1. HENNESSEY DID THE 600 UPRADE.(OVER 600 HP ON THE CRANK) I HAVE
ADDED "ADD" BUMPERS WITH RIGID LIGHT BARS ON FRONT, AND 2 SINGLE ON THE OUTSIDE
OF FRONT AND 2 SINGLE RIGID LIGHTS ON THE BACK BUMPER. THIS IS A MONSTER TRUCK.
IT WILL HAUL ASS!!! I HAVE HAD SEAT COVERS ON THE SEATS SINCE I BOUGHT THE
TRUCK, SO SEATS LOOK LIKE NEW. I HAVE UPGRADED THE TIRES AND PUT NEW BLACKED OUT
RIMS ON THE TRUCK. YOU CAN LOOK OVER THE HENNESSEY RECIEPT ATTACHED TO SEE ALL
THE WORK THEY DID TO THE TRUCK. HENNESSEY ALSO INSTALLED A CUT OUT ON THE
EXHAUST. IF YOU REALLY WANT TO GET ATTENTION TURN THESE BABIES ON, YOU WILL
DEFINETLY TURN HEADS. THIS IS A DREAM TRUCK, DON'T MISS THE OPPORTUNITY TO TAKE
IT HOME. THEY ARE NOT MAKING THE RAPTOR ANYMORE AND THE NEXT THEY ARE REPORTING
COMING OUT WITH THE NEW RAPTOR RUMOR HAS IT WILL BE A 6 CYLINDER OF SOME SORT.
THIS TRUCK WILL ONLY GO UP IN VALUE OVER TIME. I ALSO HAVE $1000 WORTH OF
ACCESSORIES THAT HAVE NEVER BEEN INSTALLED TO THE TRUCK THAT WILL GO WITH IT.