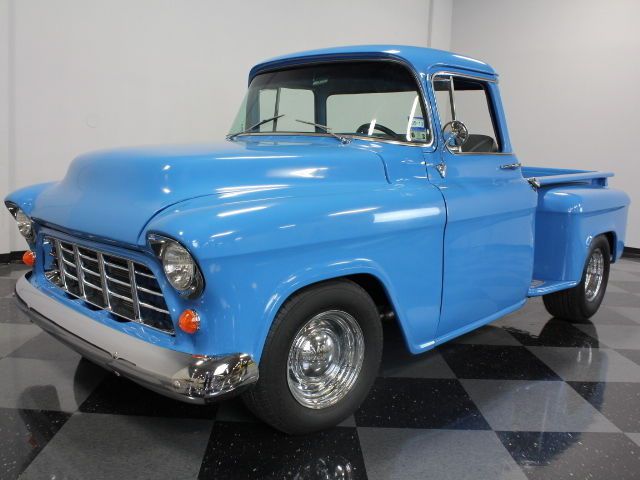 With mid-50s Chevys of all types surging in value every day, isn’t it time you took home your dream truck like
this 1955 Chevy 3100 pickup? Cool trucks like this won’t be this affordable forever.
Three inch wider rear fenders give the ability to handle some seriously wide rubber underneath. The interior is
brand new and sticks to the original recipe for the most part. The factory bench wears a fresh gray seat cover that
shows appropriate vertical pleats and is made out of materials that will probably outlast the rest of the truck.
But look a little closer: the original instrument panel is stuffed full of Dakota Digital gauges with a blue glow
and a tilt column. There’s also an aftermarket A/C unit that effectively chills the interior, and the tall Lokar
shifter replicates the vintage look in smooth billet aluminum.
The 350 cubic inch V8 has less than 1300 miles and carries all the good stuff. Induction is complements of dual
Edelbrock 600 CFM 4-barrel carbs feeding a set of FlowTech aluminum heads. Thanks to a TH350 3-speed automatic
transmission, it cruises effortlessly.
If you want this truck, make an offer.