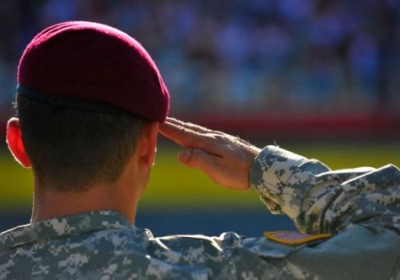 American servicemen and women interested in a new vehicle from Chevrolet, Buick or GMC now have a bit more incentive to head down to their local dealer, as General Motors has announced plans to improve its military discount program.

The new GM Military Discount Program offers eligible consumers a new Chevy, Buick or GMC at invoice pricing, which in some cases can take very large chunks out of a car's retail price. When factored in with other incentives, most of which are available with the Military Discount, the bargains are thick on the ground for members of the US armed forces.

GM's Retail Sales and Marketing Support general manager, Chuck Thomson, said, "GM has long supported the military and military families, and we hope this simplified and enhanced discount will show our appreciation for their service and help make it easier for them to own one of our great new vehicles." The program is open to all active duty and reserve members in the Army, Navy, Marines, Air Force, National Guard and Coast Guard, as well as veterans that have been out of the service for less than a year. Military retirees and their spouses are also eligible for the discount.

Take a look below for the press release from General Motors.

DETROIT – Enhancements to GM's vehicle discount program will save active and reserve military members thousands of dollars when they purchase a new Chevrolet, Buick or GMC car or truck.


The simplified GM Military Discount program offers an invoice model and options cost (less than the Manufacturer's Suggested Retail Price) plus destination fees and a $150 program fee for eligible vehicles. It improves what was already the most generous vehicle discount in the industry.

The discount can be combined with most current incentives – including bonus cash, consumer cash, GM Card and trade-in allowance. Also included is a 2-year/24,000-mile scheduled maintenance program on new 2014 models.

"GM has long supported the military and military families, and we hope this simplified and enhanced discount will show our appreciation for their service and help make it easier for them to own one of our great new vehicles," said Chuck Thomson, general manager, GM Retail Sales and Marketing Support.

GM's military discount is available to more military members than any other brand: active duty, reserves, veterans within one year of discharge date and military retirees and their spouses.