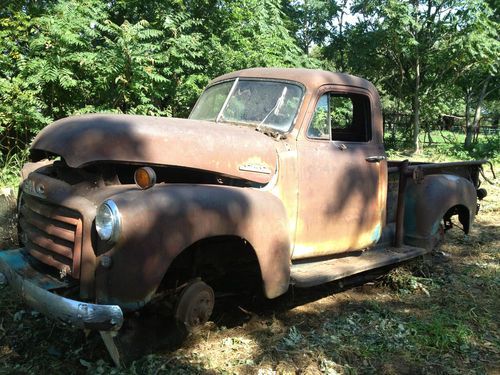 You are bidding on a 1947-1953 ?? GMC 1/2 ton short bed truck.  This is a GMC truck, Ebay has it in the Chevy Category.  This truck was abandoned on my father in laws farm around 1976-77.  It has sat up on blocks just like you see it until last week when we cut the trees our from around it and sat it out in the grass.  It is now sitting on the stumps of the trees we cut down to pull it out.  The transmission is Gone.

I'm sure the 6 cyl. engine is locked up.  Right front fender was damaged back in the early 70's or earlier , many years ago.  There is a tree that grew between the bumper and dented fender for the last 30 years, it is stuck between the bumper and dented front fender ( you get it that way)  Large rust hold in the floor board under the seat area.  Usual rust along the corners of the floor boards in the cab.  I'm sure the brakes are locked up.

I don't have any 6 hole wheels to put on the truck.   When you come to pick it up we'll have a large tractor with loader avail and I can call in a Roll back to assist if needed ( no charge to you to help load ).  Paypal for deposit but not for the full payment.  Will provide a bill of sale only for this truck.  Sold as is.