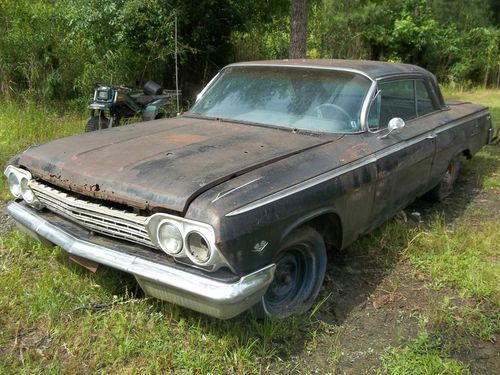 Condition: Used: A vehicle is considered used if it has been registered and issued a title. Used vehicles have had at least one previous owner. The condition of the exterior, interior and engine can vary depending on the vehicle's history. See the seller's listing for full details and description of any imperfections. ...
PLEASE READ ENTIRE DESCRIPTION BEFORE BIDDING!!!! THANKS!

1962 Chevy Impala SS. I pulled this car out of a resting spot where it was for the past 20 years. The car is mostly complete. It has factory Power Windows!!! This would be a great canidate for restoration of even for parts. Overall the car needs alot of body work. It has a V8 engine in it. Not sure if its original or not. The automatic transmission is not in the car but comes with it. I have not tried to turn this engine or anything. The car has alot of potential. It has factory power indows which you dont see everyday. The body on the car need rust repair in the drivers side floors, passenger floors look pretty good. The rockers and quarters need body work also (see pics). The trunk is rusted and needs repair. I have attached the best pics I could of te rust repair needed. The car is missing the front seat. Most of the chrome is in the car see pics, there may be some missing. What you see is all I have for the car. Please remember that this car sat for may years and needs a TOTAL RESTORATION.  VIN# 21847S200727

The car overall is not as bad as it could be. What you see is what it is. I have a NC Title for this car but it is signed by the old buyer who bought it in 1985, so it will need to have a new title. I have no way of geeting in touch with the person who signed it. But the title is there. It has been signed in the buyers spot but never transferred. I am selling as is. I will write a bill of sale, but title will need some work to get straightened out. I don have the time to do it. But I will write a bill of sale. Title is not in my name. It may be easier just to get a new title through Broadway title.

Car is being sold as is where is. Must be picked up in Grimesland NC 27837. Car has 4 flat tires. Need rollback or trailer with winch to move car.
I am selling this car for parts or restore.
Please ask all questions before you bid. call Billy 252-565-2212
IMPORTANT: ALL PAYMENTS MUST CLEAR MY BANK AND YOUR BANK BEFORE CAR IS RELEASED. I PREFER PAYPAL OR CASH! CAR CAN STAY AT MY LOCATION FOR UP TO 30 DAYS ONCE PAID IN FULL WHILE BUYER ARRANGES AND PAYS FOR SHIPPING. BUYER RESPINSIBLE FOR ALL SHIPPING CHARGES.