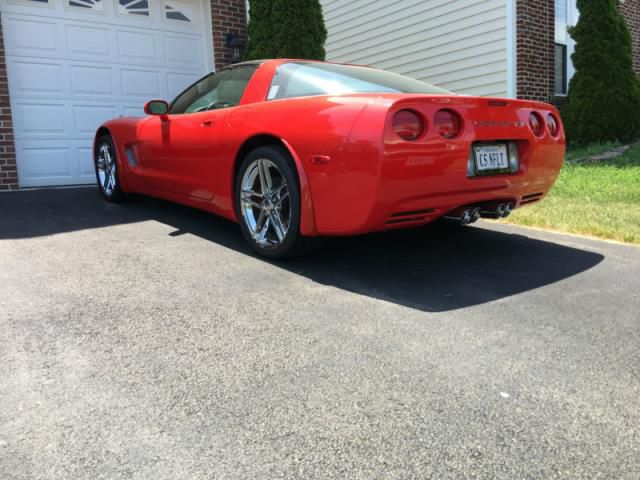 If youve been looking for a Vette, this is The One. Selling my Torch Red 2003 Corvette Coupe with targa top and only 32,475 miles. The car is beautiful, paint is excellent, well maintained and has several very tasteful upgrades. Car has the Heads-up Display and premium Bose sound system. It has 4 brand new 18 275/35ZR/18 front and 19 305/30ZR/19 Nitto INVO rear tires with less than 500 miles on them. New chrome Z06 style rims with no curb rash or blemishes. Custom splash guards painted to match the car that mold to the contour of the wheel well and gives a factory look. Billy Boat B&B PRT exhaust system with round chrome tips. 50th Anniversary badging all the way around that lets everyone know this is the 50th Anniversary Corvette. Interior is all original and in very good condition. No rips or stains in leather seats or any other issues like that. Car has an automatic transmission, so sitting in stop & go traffic jams are a breeze as opposed to the constant clutch and shift demands of a manual transmission. You will not be disappointed with this Vette. Clean Carfax...no previous accidents. Glass targa top does have some peeling of the UV coating, but can be restored with a professional polishing and refinishing of UV coating.
Any questions at : villard0oalberta@laposte.net