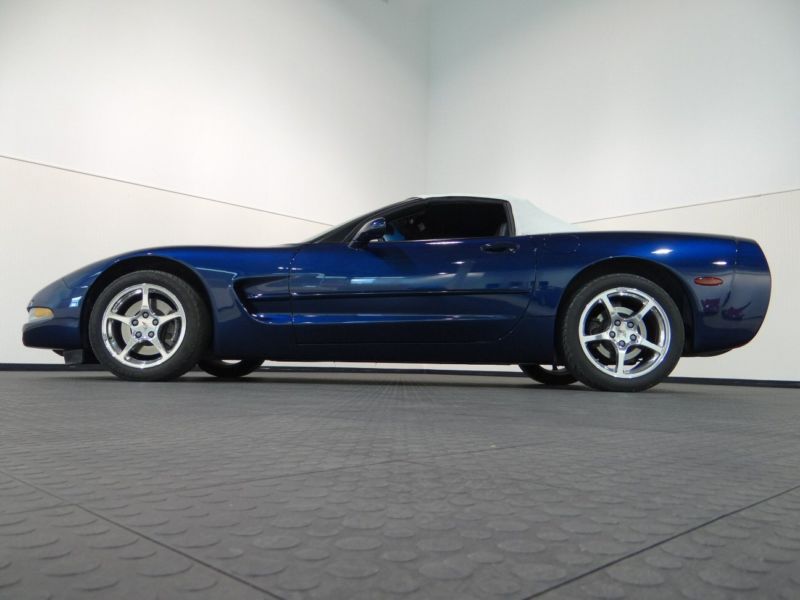 For sale is a 2001 Chevrolet Corvette Convertible. This 2001 Chevrolet Corvette Convertible is powered by its 5.7L
LS1 V8 engine and is backed by a 4L60E 4-speed automatic transmission. New for the C5 Corvettes that were
introduced in 1998 was that the transmission was relocated to the rear of the car to form an integrated,
rear-mounted transaxle assembly, connected to the all-aluminum LS1 engine via a "Torque-Tube" which enabled a 50-50
front to rear weight distribution for improved handling. The LS1 engine initially produced 345 horsepower but was
increased in 2001 to 350 horsepower and 360 ft./lbs. of torque. Showing only 18,524 miles on the odometer, this
one-owner C5 has been pampered and always been stored in a garage! This beautiful 2001 Corvette is painted in a
Navy Blue Metallic exterior with a white convertible soft top and black leather interior inside. With 14,173
convertible Corvettes produced in 2001, only 2,587 rolled out off the assembly line painted in this color. Options
on this 2001 Chevrolet Corvette Convertible for sale include: Dual Zone Air Conditioning, AM/FM Radio with CD
Player, Manual Convertible Top, Cruise Control, Power Brakes, Power Steering, Power Locks, Power Seats, Power
Windows, Anti-Lock Brakes, Telescopic & Tilt Wheel, Traction Control, Keyless Entry, Seat Belts, Driver and
Passenger Airbags, Anti-Theft System, Heads Up Display, Leather Interior, Aluminum Wheels, and Radial Tires. If you
are looking for a fun summer convertible to enjoy, this awesome 2001 Corvette is the ticket.