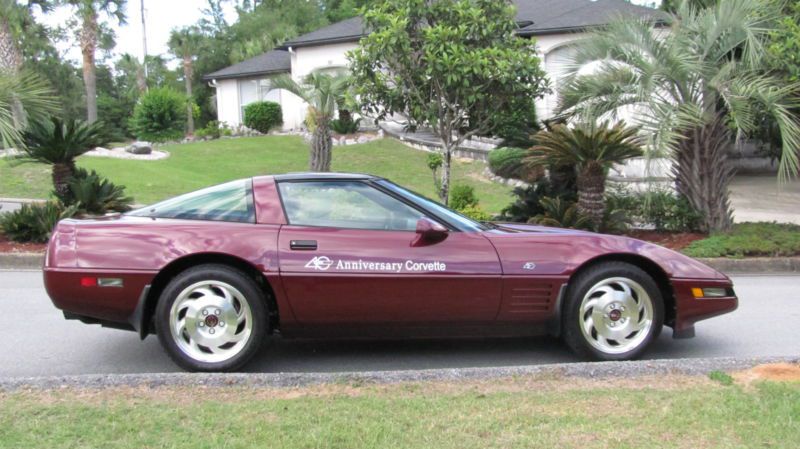 Please email me with any questions or requests for additional pics or something specific at: carleencffugo@newcastlefans.com .

If you are talking the time to read this listing you may have some interest in a Corvette like this. No where will
you find one more carefully cared for and in impeccable condition. You can see all photos in full screen by
clicking on main photo and arrows will appear at the edges to view.
This is a wonderfully cared for totally flawless '93 40th Anniversary Edition Ruby Red Corvette. Please note that
the ONLY real 40th Anniversary EDITION was built in the iconic Ruby Red only. LT1 engine, cold Climate Control,
fantastic BOSE Stereo system, Keyless remote, rare 6 speed, 8 way power seats on both sides, and power antenna,
to name a few. This is the REAL Deal 40th ANNIVERSARY and it's SPECTACULAR. No complaints about this one. This
Corvette was ordered and privately owned by one executive for 22 years. The car spent its whole life in a climate
controlled garage/mancave in South Florida, never driven in poor weather and it has never felt a raindrop. It
looks, feels and drives as it would have in 1993. All rubber seals are perfect, no scuffs on anything, carpet 100%,
leather also 100%, a 6 Speed that is flawless in engagement and a clutch that truly feels like it is new. The LT 1
Engine is quiet and strong. No squeaks, rattles or groans, just pure pleasure. Always MOBIL 1 OIL. Everything
works like it should. I have the original books, Build Sheet, purchase order and a Window Sticker that was never
applied. The Smoked Glass Roof was an option that gives you the feel of an open car. This vehicle is a Rare part of
history that not many will enjoy. This car has a modern generation LT1 which came out at the end of 1992. It has
regular maintenance and a brand new battery.
The body has had no paintwork or accidents. The Ruby Red exterior is in exceptional condition. Wheels are perfect
and including the Ruby red centers. You can see the condition and including the clean engine compartment. Most of
the original suspension stickers still remain. The car was at many regional shows in South Florida and always won
"Best in Class for an Original Vehicle" with scores above 9.7 out of 10. The actual price of this one was $48,579.
The equipment includes a 5.7 Liter 300HP Engine, electronic climate control, BOSE Premium 6 speaker Stereo System,
Dual 6 way Power Seats, Premium Leather, PKA keyless entry system, chrome 40th Package & emblems, Tempered Smoke
Glass Roof, heated mirrors digital dash and of course it has never been smoked in. It looks and drives new. The
decals are period specific. Don't have $85,400 for a new one Make me an offer I can't refuse and you can own one
just like new and you won't see yourself at every corner, but this is a real "head turner". How many cars like
this will have lived all their life in Florida and not beat up in any way? Remember, “not a raindrop” ever.
There are two sets of keys and I drove the car only 15 miles.
NADAGUIDES The HIGH RETAIL Price For a Classic 40th ANNIVERSARY with Glass roof in Above Average condition.
$25,925. High Retail Value would be a restored car or a well cared for original low mileage one in near new
condition. AVERAGE Value is $18,100 which can be a higher mileage, perhaps painted showing wear.