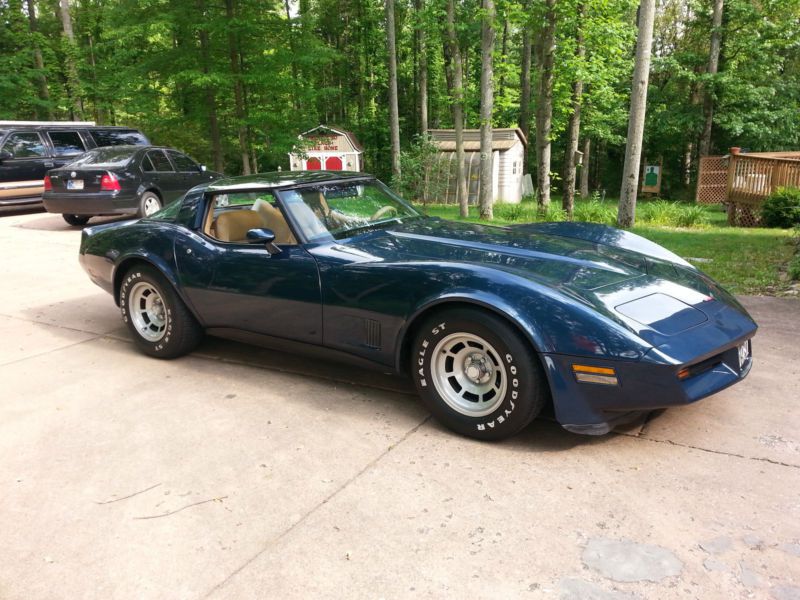 1981 Chevrolet Corvette / Blue
VIN: 1G1AY8764BS431468
My wife and I are the 2nd owners of this wonderful machine.
The miles are accurate and the vehicle title will reflect the accurate miles.
We are selling several of our toys in order to simplify our life. We are senior citizens and are now looking to
acquire a condo in FL and we will only be allowed 1 automobile and 1 motorcycle.
We have enjoyed this 1981 Corvette which drives like new and with only 49,553 miles {which will change as we will
be driving it until it goes to someone else}.
I will describe this Corvette to the best of my knowledge.
The radio is an AM/FM original to the car and works perfectly. The radio antenna does not go up and down but I have
a new one in the box that will go with the car.
The seats are in excellent shape WITH NO rips or tears whatsoever.
All instruments on dash work perfectly including the clock.
The speed-o / tachometer work perfectly.
All dash lights work perfectly.
The DASH has NO CRACKS in it.
The windshield wipers work perfectly
The Windshield has a stress crack about 8” long in the driver left corner. It does not interfere with your
vision.
The cruise control works perfectly.
The power windows works perfectly.
The power door locks works perfectly.
The keys operate the ignition, glove box and door locks as they should.
The headlights operate perfectly.
Brakes are excellent and work perfectly. The parking brake DOES NOT work.
The automatic transmission shifts perfectly. It does have a “SMALL” leak around one of the seals BUT it’s
very small and I was told not to worry about it.
The radiator is brand new {installed less than 100 miles ago} as the original one finally rusted out.
The battery is new {installed less than 100 miles ago}
The water-pump was changed last season {Less than 500 miles ago}.
The fuel pump was changed last season {Less than 500 miles ago}.
The driver side T-top has air coming in and I suspect it’s time to replace the T-top seals. I have a new set that
will go with the car.
The driver T-top has a long scratch on the mirror finish. It was that way when we acquired the vehicle. It does not
bother us.
The A/C blows Ice cold, all vents operate as they should and the heater works as it should.
The exhaust is still in excellent shape.
There is NO RUST on this vehicle.
In 2007 the car was involved in a minor accident and was repaired by a professional shop and received a complete
repaint at that time. There was no frame damage just damage to the body.
The tires are only the 2nd set of tires that’s been on this car and they still have lots of life left in them.
I have a few extra interior / exterior parts that I will include with the car.