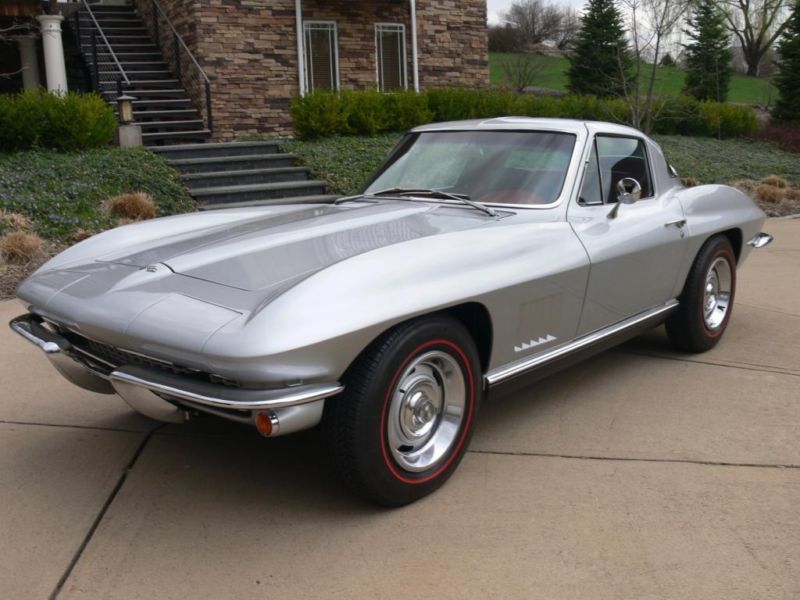 Numbers matching, 327/350HP, 4spd.
Silver and Red - Not original to the car. Data plate matches colors but has been replaced by a prior owner. Factory
A/C that has been upgrade to R134 components, factory sidepipes (not installed), factory headrests, factory AM/FM
radio, factory rally wheels and new redline tires, posi-traction. Original manual and jack. New power steering
pump, fuel pump, spark plugs and wires, many small parts. New flow-thru exhaust for quieter cruising. Lower rear
panel replaced with exhaust ports. All original sidepipe parts and mufflers, including lower rear panel go with the
car. Mufflers and pipes are in great condition.OEM sill trim installed. Original rear bumpers re-chromed. All other
chrome in excellent condition. New taillights and bezels, new front grille. Interior is spotless. All gauges, horn,
clock and lights work. Headlight buckets operate. All heat shields are new and in place. All four grounds straps
are new and in place. Exhaust manifolds have been surfaced and new gaskets in place. Factory AM/FM works. Handles,
runs, shifts and stops as designed. Reproduction window sticker included - see photo. Windshield has some wear -
scuffs. One 2" crack in paint behind passenger door handle. One 1/2 crack in paint in front of driver's mirror. No
stress cracks. No signs of damage to body or frame. No patches, no rust. Body is extremely straight - see photos.
Bird cage in order. All rubber in excellent condition. This is not a show car but it is an excellent driver
condition car. It is also an antique car so it is not perfect but with care and maintenance it should give years of
enjoyment and value. There is no other color showing anywhere on the car.