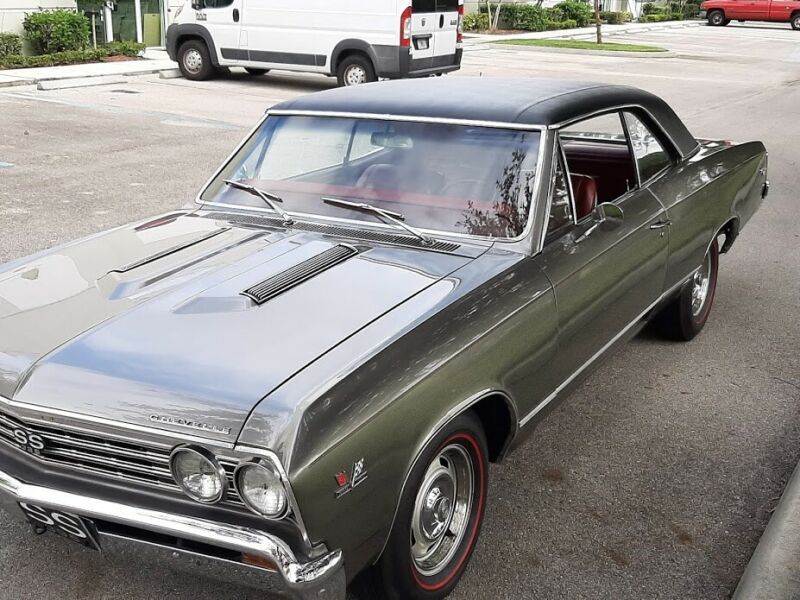 1967 chevelle malibu 2 dr hardtop 3 speed automatic speedometer shows 95356 135 vin this is not a factory SS.
The car has a 383 stroker engine power steering and power brakes disk in front drum rear and electric fan on
radiator.
Also has a new 300 watt AM FM in dash stereo radio 6 months old.
New battery ,rally wheels, and looks like new air shocks.
Car has red line tires on it with a lot of tread on them.
The interior is in perfect condition see pictures, the chrome is in real good condition front and rear bumpers look
like new.
Headliner and vinyl top are in excellent condition no rips or tears in the fabric.
Dash pad is great shape and the dash is complete with nice chrome.
The red interior has been completely redone seats are like new and had new foam cushions installed no rips or cuts
on the seats and the red carpet is real nice too with chevelle floor mats.
The paint color is a light silver metallic and has a robust shine to it.
Taking about the paint color a funny thing I never seen before when I took the car to my buddy's place to put the
car on the lift so I can look at the underside we noticed that the silver paint when in low light or at night the
car paint turned to black? In the sun the car is silver and at night it looks black?Just thought I would mention
it, I thought it was pretty cool take a look at the last picture in this ad you will see what I mean.
The body panels are all straight no waves or ripples in doors, quarter panels. or fenders.I did not see any body
rust on this car looks great.