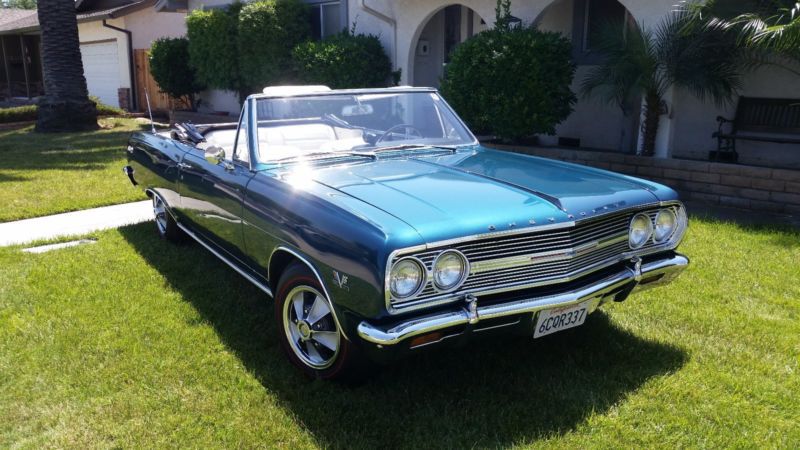 If you have questions email email me at: leonilalrragin@hairdressers.net .

Up for sale is a REAL 1965 SS Malibu Convertible 138 vin car. In 1964 Pontiac introduced the GTO by stuffing a 389
into a Lemans and started the muscle car craze. So in 1965 Chevrolet had to find an answer, what they came up with
the Z16! There were 201 of them made, 200 hardtops and 1 convertible. That convertible was lost to history and if
ever found would be a priceless "1 of 1". This car was made to look like what the second one would have been.
It has a big block 454 in it and is a 4 speed. Featuring the power convertible top, woodgrain steering wheel, dash
mounted clock and the under dash Kleenex dispenser; all super rare options for the '65. It also has the same Z16
wheel covers in near perfect condition. I also hunted down and rebuilt the original number Holley carburetor that
came on the Z16. Both the transmission and motor were rebuilt before I bought it and have approximately 15,000 -
20,000 miles on them, although I do not have the documentation.
This car looks stunning in it's Teal Blue paint; with it's white top and interior, it's a perfect combination. If
you tried to build this car today, it would probably cost close to 100K. Especially if you were lucky enough to
find all the rare options this car has.
As in any 50 year old car there are a couple of minor things that will need to be tended to if you want to make it
perfect. The top drivers side latch for the convertible top is very thin metal, I would probably reinforce it with
a brace or add more metal to it. The rear window is made of real glass, not plastic and the zipper that goes around
the top has skipped a tooth. I had it priced to replace at a local interior shop for $125.