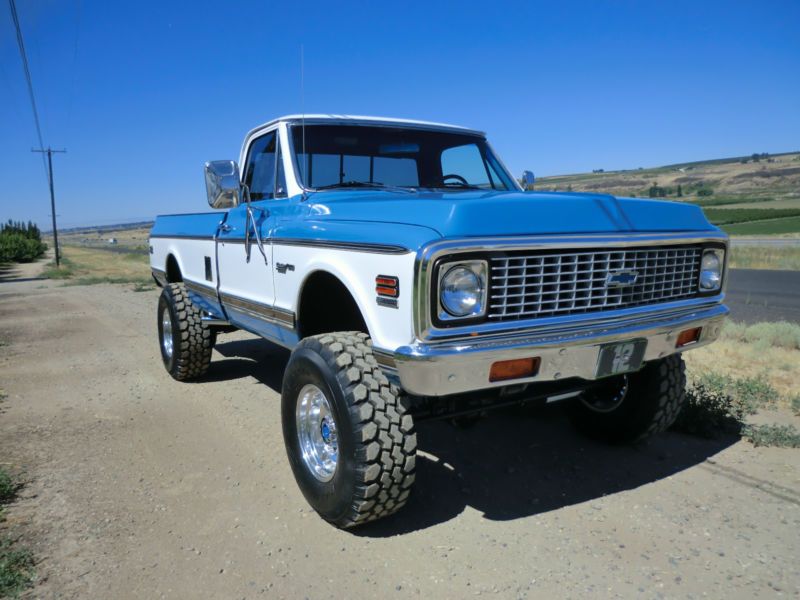 Auto restoration shop offers the owner’s personal 1971 Chevy K20 4x4 Pickup. We built this truck for the owner,
just test/tune miles since completion. This is a factory K20, the 4x4’s never got a big block from the factory,
we built a nice 454 for this truck, the big block conversion was done correctly. This is a rust free high desert
Oregon truck. This truck has some nice options, built to be driven and used. This truck could be proudly shown at
any car show, but was not built with than intention. We have quite a bit more money in this build than it’s
worth, shop owner has been selling off some of his vintage car collection for business expansion. This is his last
and favorite Chevy pickup. This truck is big, loud, fast and mean. Everywhere this truck has been driven gets
conversations, photo requests and thumbs up. Not many factory 4x4’s out there built to this level. I believe the
1971/2 Chevy K20 was the best pickup ever built.
MECHANICAL
We started with a 70’s Gen IV Big Block 454. Large oval port “781” casting heads, forged internals, Comp 282
hydraulic camshaft, Crane roller rockers, balanced rotating assembly. Edelbrock aluminum intake, 750 CFM Edelbrock
4 barrel carburetor electric choke, HEI (electronic) ignition. Headers are long tube for a Chevelle, best setup for
this conversion. Aluminum valve covers and air cleaner. 454 built for torque, with a bumpy cam, with incredible
low-mid range power you want in a 4x4. We never Dynoed this motor but guess it’s in the 425-450 Horse & 500+ ft
lb TQ range. We’ve seen so many times guys go too far on a BBC 4x4 build with rectangle port car heads and a huge
cam which gives only top end power you don’t want in a 4x4. We have the ignition timing set for premium pump
fuel. Dual 2 ½ in exhaust to dual 40 series Flowmaster mufflers. Power steering, large hub open knuckle disc brake
front axle, heavy duty Eaton rear axle, both original to the truck, 4.10 gears. Rebuilt TH-350 automatic
transmission with shift kit to rebuilt 205 gear driven transfer case. Part time T-Case with 2H 4H N 4L. Skyjacker
lift kit and shocks, brand new 35’s on new aluminum wheels.
We believe this to be one of the best 67-72 4x4 trucks out there, built tough to be used. This is not a 1000 point
trailer queen show car, it is a very nice excellent condition driver. Finding a solid restorable 4x4, restoring,
converting to big block would cost near double the asking price and take time to build, save money and time to buy
it done.