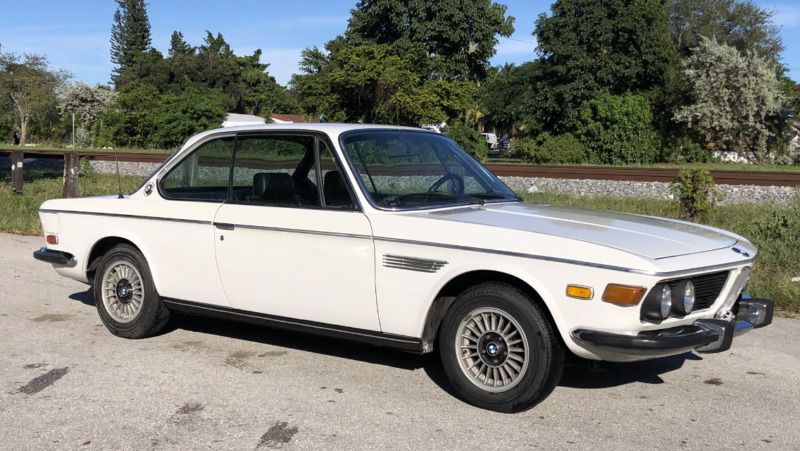 1970 BMW 2800CS E9 coupe. I looked long and hard before finding this car.The car runs and drives. The engine sounds great and does not make any ticks or knocks or anything of the sort. the original carbs (included with the car) have been replaced with webers. the car has not been driven much in the last 15 years so they could use a cleaning. the pedal feels a little weird and i traced it to a couple of small bushings
that need to be replaced by the firewall behind the brake booster. the car originally had a/c and most of it is
still there but it is not working and i have not looked into why.
The 4 speed transmission shifts fine. I'm sure a new set of shifter bushings would clean it up but it does work as
is. the LSD works great.
I rebuilt the front calipers and put all new rear brakes. it still needs a good bleeding though.
The exterior of the car looks great as you can see in the pics. by no means is it perfect but it is nice for a
driver. such beautiful lines. the car used to be blue and was painted white by the previous owner. it could use new
door seals.
the interior looks pretty nice also. the dash has some cracks, the wood veneer needs a little love, the rear seat
arm rest has some cracks on the top part. the rear power windows need to be gone through, i bought new switches for
it but have not tried to anything with them. there is no radio. the shifter console needs a little attention.
unfortunately these cars are infamous for rust. this one is not too bad. underneath is neither beautiful nor
horrendous. it does have surface rust. looks like most of it can be cleaned off with a wire brush and sprayed with
undercoating. there was a small patch in the driver side floor. you may find a spot here or there that may need
attention but for the most part it is pretty solid.

If BMW's new i sub-brand sounds more like it belongs to consumer electronics than it does to automobiles, that's probably no mistake. After all, electric vehicles bridge the gap between conventional automobile and electronic gadget - just ask our compatriots over at Engadget that report on them all the time. But to drive the point home even greener, BMW has, together with the new i3, launched a new collection of electronics accessories that make the Bavarian automaker as much a competitor with companies like Belkin or Griffin as it is with Audi or Mercedes-Benz.
The new BMW i Collection includes items like a solar charger for phones and MP3 players, a laptop bag made from felt-like recycled PET plastic and vegetable-tanned leather, and of course the requisite USB dongle. Other items include keyfobs, a shopping bag, notebook and ballpoint pen.
All the items, of course, are designed to extend the i3's upscale tree-hugging image to items you can hold and use while your EV is charging in the driveway. They go on sale starting next month with prices ranging from 15 euros ($20) for the pen or lanyard to 99 euros ($135) for the shopping bag. Details in the press release below and images of the whole collection in the gallery above.