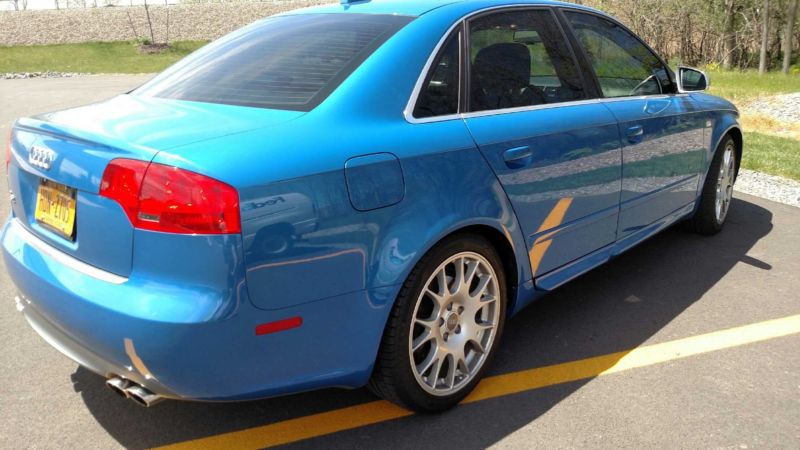 For more details email me at: shaunta.zidzik@metadatamitigator.com .

2006 Audi S4 in showroom condition! Never seen a winter or salt. I would not hesitate to challenge you to find a
cleaner more well kept car. Meticulously maintained mechanically and inside and out. No wear on the car. Garage
kept, all maintenance up to date. Must see to appreciate such a nice car.
Beautiful sprint blue pearl exterior-rare color w/ black leather Recaro seats. All wheel drive, with a 4.2 liter V8
motor and 6 speed manual transmission. 340 horsepower so this is a fast car. Loaded with every available option
power everything, moonroof, cruise control, powers seats, as well as navigation. Tires are new and it has factory
18" polished aluminum wheels. I love the car however doesn't really fit my lifestyle at the moment. Clean car fax
all original-stock car.

2014 Audi RS Q3 breaks out ahead of Geneva reveal

Ahead of its big reveal next month at the 2013 Geneva Motor Show, Audi has released a handful of images and plenty of details for the all-new RS Q3. As the first-ever crossover from the marque with RS branding, this will be the fourth RS model to go on sale this year after the RS5 Cabriolet, RS6 Avant and the RS7, and while UK and Germany sales have been confirmed, there is no word as to whether we can expect this high-performance CUV to be available in the North America.
Sharing its 2.5-liter turbocharged and direct-injected five-cylinder engine with models like the TT RS and the RS3 Sportback, the 2014 Audi RS Q3 should deliver on performance, as it pumps out 310 horsepower and 309 pound-feet of torque (peak torque starting at just 1,500 rpm and running up through 5,200 rpm). This potent engine is paired to Audi's seven-speed S tronic transmission and Quattro all-wheel drive. Despite its small stature, the RS Q3 still tips the scales at just over 3,800 pounds. Even so, performance figures are still impressive with a limited top of 155 miles per hour and a stated 0-62 mph time of 5.5 seconds. The RS Q3 also gets a sport suspension that has been lowered by 25 millimeters, launch control and weight-saving front rotors with a wave-cut and cross-drilled design gripped by massive eight-piston calipers.
Looking almost identical to what we saw last year in concept form in China, the 2014 RS Q3 looks just as sporty as its spec sheet suggests that it is. Up front, the fascia gets massive air intakes with silver vertical accents and, like other recent RS models, the Quattro emblem is written across the lower air intake. The silver accent motif also continues on the grille surround, mirror caps, roof rails and rear diffuser trim, and the oval exhaust outlet is also an identifying feature of Audi's RS cars.

Bavarian tuners ABT have done another job on the Audi R8 V10, pumping up the 5.2-liter FSI V10 from 525 horsepower to 600 hp, and torque from 391 pound-feet to 406 lb-ft. With 50 more horsepower than the R8 V10 Plus - but not the extreme weight-loss scheme - ABT claims a 0-62 mile per hour run of 3.5 seconds, the same as the R8 V10 Plus, and a top speed for the mid-engined coupe of 198 miles per hour "is no problem at all."
Managing all that speed are the aero tweaks provided by a comprehensive body kit including a rear wing, a lowered and beefed-up suspension, a stainless steel exhaust and 19-inch wheels in two different designs.
The press release below has a few more bits of info on the matter. And while ABT hasn't put a price on the Audi upgrades, but it's safe to say that nearly 200 mph in an R8 won't come cheap.