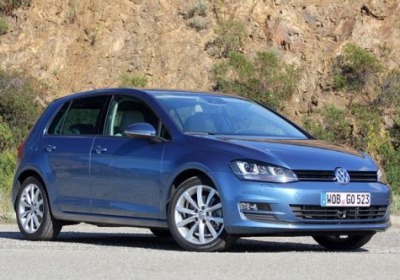 The seventh-generation Volkswagen Golf just went on sale in Europe, but it is already off to a promising start. Announced as the Geneva Motor Show kicked off, the newest Golf was named European Car of the Year for 2013 in dominating style over cars like the Subaru BRZ/Toyota GT86 twins, Volvo V40, Ford B-Max and Mercedes-Benz A-Class.

According to Automotive News Europe, the MkVII Golf won handily over its rivals with a total of 414 votes. The Subaru BRZ and Toyota GT86 received 202 votes finishing in a distant second, while the Volvo V40 (189 votes), Ford B-Max (148 votes) and Mercedes-Benz A-Class (138 votes) round out the top five. The new Golf marks the third Volkswagen product to receive the prestigious award with previous cars including the MkIII Golf and the most recent iteration of the Polo.

-Volkswagen wins the most coveted European car award
-The Golf VII is number one with European automotive journalists
-More than 150,000 Golf vehicles already ordered throughout Europe

Wolfsburg/Geneva, 4 March 2013 - The new Golf is Europe's "Car of the Year 2013." The renowned international "Car of the Year" Award is deemed one of the most important barometers in the automotive industry. The winners were announced in the run-up to the Geneva Motor Show in the afternoon.

Prof. Dr. Martin Winterkorn, Chairman of the Board of Management of the Volkswagen AG, states: "That's a superb result, and we are very proud of it. This most significant European award is the perfect final touch to the list of prizes we've already won. Over 29 million customers have made the Golf into the icon that it is. The Golf will continue this success story."

The vote for "Car of the Year" is one of the oldest and most renowned in Europe. The best new cars have been given prizes annually since 1964. The panel of judges, consisting of 58 automotive journalists from 22 countries, had nominated eight candidates beforehand that would enter the final run. They were tested and compared and evaluated during the last few months under a broad range of criteria, such as fuel efficiency, comfort, safety, driving properties, functionality, design and technological progress. In the 50th round of the traditional competition, the new Golf came out on top before its seven competitors, garnering a total score of 414 in the final vote - the one in second place lagged behind with a score of 212 less. Two Volkswagen models have received the coveted prize before: the Golf in 1992 and the Polo in 2010.

The most successful car in Europe has been further perfected in its seventh generation. The new Golf scored high not only with its quality, comfort, low fuel consumption and emission values as well as its excellent drive properties but also in the most vital area of safety. The best example for it is the standard Automatic Post-Collision Braking System that slows the vehicle down automatically after a bad accident so as to reduce the remaining kinetic energy, thus avoiding more subsequent collisions. Numerous safety and assist systems have been added, such as the standard electronic XDS differential lock, the preventive passenger protection system and the Lane Assist. Together, they offer a maximum of safety and comfort at an affordable price.

The top result in the "Car of the Year" competition was preceded by numerous awards at home and abroad: "Best cars of 2013," "Auto Trophy 2012," "Auto der Vernunft (Car of Reason)" and the British "Top Gear - All the car you'll ever need" Award.

The Golf's success story is exemplary. Whether as a classic Golf, Golf Cabriolet, Golf Variant or Golf Plus -- it's available on all five continents and in more than 120 countries. With nearly 30 million vehicles produced, the Golf has set new standards in the compact class in the last few decades. New technologies like ABS, the airbag and the electronic stabilisation programme were integrated and have decisively shaped automotive construction in the class named after it. The exterior and interior of the Golf are also leading the way: Like almost no other product, the Golf distinguishes itself by its unique product and design language, which is seen as timeless and classless to this very day.