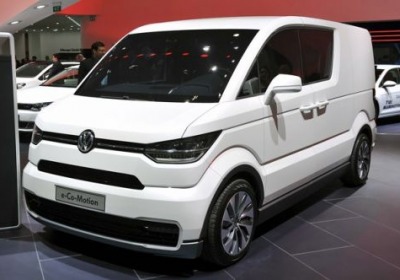 Volkswagen sees a future where the bulk of the world's freight is moved into city centers by train, then offloaded onto a fleet of smaller, light-duty commercial vehicles for final delivery. Those vehicles could wind up looking something like the company's E-Co-Motion Concept that debuted at the 2013 Geneva Motor Show. The EV features a modular underfloor drive unit comprised of a battery, motor and gearbox that can be paired with any number of cab and body configurations to suit a buyer's needs, from a refrigerated box to a standard flat bed.

The E-Co-Motion Concept features a rear-mounted electric motor with 113 horsepower and 199 pound-feet of torque. A standard 20 kWh battery pack provides a driving range of up to 62 miles, while 30 kWh and 40 kWh packs could deliver 93 and 124 miles of travel, respectively. Check out the press release below for more information.

Hannover / Geneva, 04 March 2013. The global trend towards increasingly larger cities with 10, 15 or 20 million residents is associated with growing demands for transport solutions – more and more products and goods will need to be delivered to cities and transported away from them. At the same time, legal authorities are demanding significant reductions in greenhouse gases and emissions as well as compliance with more stringent CO2 limits. Moreover, many large cities are implementing vehicle access restrictions to avoid smog and fine particulate pollution. The e-Co-Motion concept vehicle, an electrically powered city delivery van from Volkswagen Commercial Vehicles, now offers a potential solution.

Such a city delivery van, according to Dr. Eckhard Scholz, Spokesperson of the Board of Management of Volkswagen Commercial Vehicles who gave a presentation this evening, should be designed to exclusively utilise electric drive systems, so that users can realise the many benefits of its vehicle properties. In the specification for such a project, top priority should be given to a vehicle that is highly manoeuvrable with a small footprint and offers very good all-round visibility with a high seat position. In addition, very good seat ergonomics with easy entry and walk-through are desirable. Loading should be made easy by a low cargo floor height, and the vehicle should also offer a large cargo capacity. Ideally, the overall concept should be implemented as a uniform platform that could serve as a basis for as many derivatives as possible − for a wide variety of body concepts and customer solutions.

The electric drive unit is mounted to the rear axle together with a single-speed planetary gearbox to achieve large wheel turning angles at the front axle and thereby the manoeuvrability that is so important for city operation. As a result, its turning circle is 8.95 metres, which is unique in this vehicle class. The continuous power output of the compact drive unit is an energy-saving 50 kW / 68 PS. The drive unit's maximum power is 85 kW / 115 PS, while its maximum torque of 270 Nm enables good acceleration even in heavily loaded vehicles. Although it was designed for city deliveries on city streets, the electronics of the e-Co-Motion concept do not limit its top speed until 120 km/h. This permits driving on city motorways and short intercity routes. A three-stage modular battery concept for the traction battery optimally fulfils the different driving range requirements of customers. A battery with a capacity of 20 kWh could be installed for driving ranges of around 100 km, while a battery with 30 kWh would enable a 150 km driving range. Finally, a battery with 40 kWh storage capacity is planned for the top driving range of 200 km. The battery box was well designed; its crossmembers and rib structure let it serve a secondary purpose as a load-bearing body element that also helps to reduce vehicle weight.

A key word here is workspace, because the functional orientation of the vehicle concept is also reflected in the cleanly laid out control centre of the e-Co-Motion. Reduced to just the essentials, this has resulted in a commercial vehicle in the best sense of the word. It focuses on the everyday needs of a transporter: step in, buckle up and drive off – without having to read an operator's manual first. There are practical storage options for tools, documents and freight goods, but without interfering elements. For example, instead of a selector lever, a rotary gear selector switch is installed, and there is no conventional handbrake lever. In turn, this simplifies walking through via the passenger's side door, which is also made easier by the conveniently folding seat on the passenger's side. While sitting in a pleasantly elevated seat position with good all-round visibility, the driver's gaze only stops as it scans the cockpit, such as in viewing the control panel for climate control and infotainment, which controls nearly all vehicle functions from a central point and displays the necessary information on an eight-inch colour monitor. Also ingenious is the movable, modular centre console with computer, storage compartment, drink holders and 12 V and 230 V accessory outlets.

These are just a few examples of innovations by Volkswagen Commercial Vehicles, which show how the e-Co-Motion concept vehicle being presented at this year's Geneva International Motor Show could be the ideal zero-emissions city delivery van of the future.