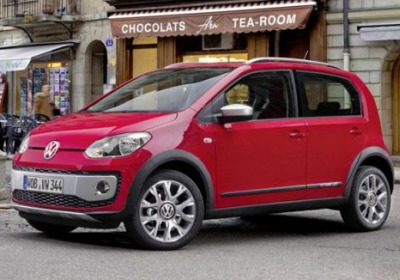 The last time we saw the Volkswagen Cross Up!, it was sitting out in the snow in prototype form, but the next time we'll see this slightly more rugged version of the diminutive Up! hatchback will be when it makes its production debut at the Geneva Motor Show next month. Looking like a micro-crossover with its raised ground clearance and black cladding, the Cross Up! will be the fourth "Cross" model for VW (after the CrossPolo, CrossGolf and CrossTouran) when it goes on sale this summer in mainland Europe (UK sales remain up in the air and US sales are highly unlikely).

Overall, the styling of the production Cross Up! has stayed fairly true to the 2011 concept car, including the front and rear fascias that offer a more rugged look, stocky 16-inch wheels and roof rack side rails. Inside, this model will get unique interior enhancements such as "Cross Up!" sill plates and an instrument panel available in red, black or silver. Like the regular Up!, the Cross Up! is powered by a 74-horsepower, 1.0-liter three-cylinder engine paired to a five-speed manual transmission, and it doesn't look like all-wheel drive will be part of the picture. For more details on the upcoming Cross Up!, check out VW's press release posted below.

Volkswagen is expanding its range of striking Cross models with the Cross up!, which will go on sale in Europe from late summer. It will join the CrossPolo, CrossGolf and CrossTouran models, which have been a big success in Europe.

Cross models are individualised Volkswagen models with a particularly rugged design and tough, lifestyle qualities. Thanks to numerous striking exterior elements, the Cross up! is instantly recognisable as a stand-alone model: sideways on, for example, black mouldings on the wheel arches and sills, plus full-length door protector strips topped with 'Cross up!' lettering create a sporty look. Further unmistakable features of the Cross up! include the silver roof rails, the wing mirrors in a light silver metallic finish and bumpers also incorporating silver elements. The robust, sporty character is defined above all by the extra ride height and the 'Cross' 16-inch alloys with a high-sheen finish and 185/50 tyres.

High-quality details are also to be found in the interior of the Cross up!, from kick-plates with 'Cross up!' lettering to seats in a special trim (in a choice of red or anthracite), an instrument panel with high-quality dash-pad (in a choice of red, black or dark silver), and a leather-covered steering wheel and handbrake lever.

A 55 kW / 75 PS three-cylinder petrol engine combined with a five-speed manual transmission serve as the power train for the lifestyle-oriented Cross up!, which is available in Germany from late summer at a starting price of €13,925. UK sales are under consideration, but not confirmed.