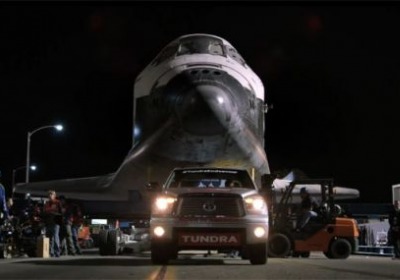 Toyota has worked up a quick video detailing the brand's involvement in the transportation of the Space Shuttle Endeavour last year. As you may recollect, the California Science Center ran into a hitch when it came to moving Endeavour from LAX to its new home. While most of the route would be covered by a robotically controlled transporter, one portion of the route directed the shuttle over an interstate. Unfortunately, the bridge across wasn't designed to stand up to the weight of the shuttle and its motorized sled.

The Science Center would have to remove Endeavour from its transporter and place it on a lighter, non-motorized sled. That's where longtime Science Center sponsor Toyota came in. As it turns out, the automaker had to prove to the California Science Center that a Tundra could actually tow the massive shuttle, so engineers put on a little demonstration with a stock truck pulling the equivalent weight over flat ground for the same distance. Once the Science Center was satisfied that the Tundra could pull it off, the move was green lit and the rest is history. Check out the short documentary below for yourself.