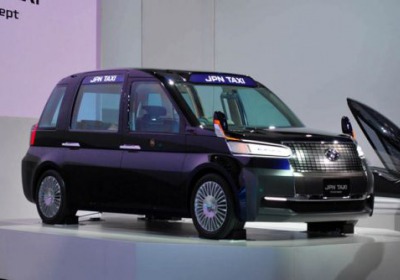 As far as beasts of burden go, New York City's new – and much maligned – Nissan NV200 "Taxi of Tomorrow" isn't a bad one. It's space efficient, reasonably economical, and its simple construction should mean it's pretty robust over the long haul, too. But it lacks panache and a sense of occasion – let alone a sense of humor – three things this this Toyota JPN Taxi Concept we found at the Tokyo Motor Show has in spades.

Unfortunately, that's about all the information we have on this cheeky London-taxi-inspired showcar. Toyota hasn't provided much in the way of details, other than to proclaim that the five-seat JPN was "created with Japanese hospitality in mind" and it "aims to enliven city streets." Japan's livery landscape has long been occupied by traditional three-box sedans – models like the Toyota Crown and Nissan Cedric. The JPN Taxi at just over 171 inches would appear to offer both a tighter footprint and added whimsy, both of which are in the automaker's favor; we hear it hopes this concept will one day become the country's own version of America's yellow Crown Vic cab.

Toyota isn't providing powertrain specifications, but we like the airy feeling of the interior (Japanese cabs typically don't have cumbersome partitions between cabbie and passengers), the minimalist driver area with three screens, and the widescreen overhead video system for passengers that bookends the panoramic moonroof. Check it out in our gallery of live shots and let us know what you think in Comments.