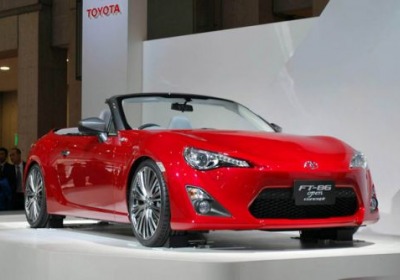 When last we checked in on our topless would-be hero, the Toyota FT-86 convertible had been reportedly placed on "indefinite hold." That was back in early October, not long after Toyota had trotted out the rear-wheel-drive canvasback to Scion dealers as a possible future product carrot if they decided not to turn in their franchises. And yet, we're here at the Tokyo Motor Show, where Toyota has taken the time to at least repaint the FT-86 Open Concept in "Flash Red," if not build a whole other car (the original Geneva showcar was white). It's enough to make our heads spin like a teenager on the verge of a breakup. Will they? Won't they?

At this point, we still don't know any more than you do – the last word we heard out of Toyota was not encouraging, although the story was that the program could still be fast-tracked if management had a change of heart. As the car has never been seen before in Japan, perhaps Toyota is merely extending its domestic audience a courtesy view before it lines this showcar in mothballs, or maybe they're still trying to make a decision on its fate and gauging public reaction on the homefront.

Interestingly, in a new story published today, Automotive News quotes Subaru brand boss Yasuyuki Yoshinaga downplaying the likelihood of a production model, saying flatly "We make the car, so if we don't make it, it can't happen." The executive went on to note, "Our engineering department told me that losing the entire roof requires a complete redesign of the structure. It would need a big change." Given that such a car would probably trade in rather small volumes, that sounds like a significant hurtle.

Either way, this FT-86 Open Concept wears red paint rather fetchingly – and we think a Scion FR-S or a Subaru BRZ would look every inch as compelling, too.

The vehicle adds that "open-top thrill" to the joy of driving and a sense of oneness with the vehicle is offered by the hard-top 86. A new "Flash Red" body color gives a twist to the iconic sports-car red.

See also: Subaru Legacy Concept has us getting our hopes up, Toyota FV2 Concept is a single-seat mood ring for the road, 2015 Subaru WRX looks to set a new benchmark in LA.