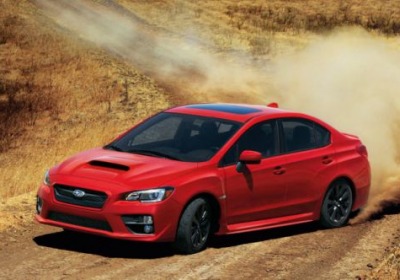 Subaru has just taken the wraps off of the new, 2015 WRX at the 2013 Los Angeles Auto Show. The totally redesigned sedan - the five-door option won't be offered - is more powerful, more fuel efficient (with the right transmission), better looking and more intelligently designed than the car it's replacing.

A new 2.0-liter, direct-injected, turbocharged flat-four sits thumping away under the hood, its top-mount intercooler getting force-fed air by a rather prominent hood scoop. Power output sits at 268 ponies and 258 pound-feet of torque, accessible between 2,000 and 5,000 rpm. While the new car only has a three-horsepower advantage on the current Impreza WRX, it delivers 14 more pound-feet of torque and delivers peak output across a much wider swath of the rev range (the old car netted 244 lb-ft at 4,400 rpm). All this extra grunt comes at a negligible weight penalty - a 2015 WRX with the six-speed manual is just 59 pounds heavier than a 2014 model.

As we said, a six-speed manual is will be available, and as a bonus, it packs one additional cog over the current, 2014 WRX's five-speed DIY transmission. So equipped, the WRX will scamper to 60 in just 5.4 seconds. As for the previously-confirmed continuously variable transmission, it will come with both six- and eight-speed manual shift modes, but will take half a second longer to get to the magical 60-mile-per-hour mark.
Interestingly, the CVT is actually projected by Subaru to get worse fuel economy than the manual. The 6MT is projected to return 21 miles per gallon in the city and 28 mpg on the highway, while the CVT can net just 19 mpg in the city and 25 mpg on the highway.

Depending on which transmission you opt for - remember, the CVT is slower and less fuel efficient... - you'll be getting a different all-wheel-drive system. The 6MT will use a continuous AWD setup and feature a 50:50 torque split, while the CVT variant will use Subaru's Variable Torque Distribution, with a 45:55 split.

The new shape, which despite the WRX now being its own model, separate from the Impreza, looks a lot like we'd expect an Impreza WRX to look. That is to say it's businesslike, if not a bit conservative. As for the interior, traditionally one of the weakest points on the WRX, it looks like a massive improvement over the 2014 model.

A thick-rimmed, flat-bottom, leather-wrapped steering wheel is the center piece, while the central stack features a pair of displays, with the top-most showing what we're guessing is performance data while the lower screen shows the more mundane information. It looks like there's also a display in the instrument cluster. Overall material quality looks notably improved, as well.

We'll have more on the 2015 WRX as it becomes available. Until then, hop down to take a look at the official Subaru press release.

At the same time, a roomier interior, upgraded cabin comfort and materials and a wide array of new user technologies give the new WRX a more refined feel. A harman/kardon® premium audio system is offered for the first time in a WRX.
The 2015 WRX design deftly blends an aggressive stance with a sophisticated sport sedan theme. The new WRX features a much bolder front design with a deep front spoiler and unique grille. The wide-body stance seen on the previous model is enhanced with new, standard 17-inch wheels. The hood, front fenders, rear doors and quarters, bumpers, headlights and taillight clusters are all unique to the 2015 WRX.

Specially designed for the 2015 WRX, the rear doors and fenders continue the model's wide-body stance in a rakish new profile. The Subaru hexagonal grille is flanked by narrower headlights designed to evoke a raptor's stare. The functional hood scoop, which supplies the intercooler with fresh air, is now set more deeply into the hood to provide better forward visibility.

Other new performance-oriented details include foglight surrounds with a carbon fiber-like pattern and vertical front fender vents that feature a bright garnish and a mesh screen. Higher-grade models use new LED low-beam headlights; halogen lights are used on other models. The side sill spoilers that help to visually lower the car also help protect the doors from rock chips.

Based on the engine used in the new 2014 Forester 2.0 XT, the WRX version uses different cams and higher-rate valve springs, among other enhancements, to extend the performance envelope. The new 6-speed manual transmission provides a wider ratio spread than the previous 5-speed and incorporates several performance and durability improvements for this high-performance application, including carbon synchronizers on first and second gears.

Premium Cabin
A one-inch longer wheelbase than the previous WRX is a factor in providing a markedly roomier cabin in the new model. The windshield is more raked than before, with the A-pillar pulled forward nearly eight inches at the base for better forward visibility, aided by a lower dashboard and narrower A-pillars. Higher seating hip points, lower side sills and wider-opening doors make ingress/egress easier. Rear seat passengers gain nearly two inches of legroom, and trunk capacity is increased. A standard 60/40-split fold-down rear seat extends the WRX sedan's versatility.

The high-performance feel starts as soon as the driver enters the 2015 WRX and grips the new flat-bottom, leather-wrapped steering wheel, which offers tilt and telescoping adjustments. The wheel integrates switches for audio and Bluetooth® control.

Rich-looking appointments and details abound, including soft-touch materials for the dashboard, door trim and center console armrest. Numerous compartments located in and around the center console hold all manner of personal items, such as phones, USB drives and MP3 players. The available power sunroof opens one inch farther than on the previous WRX.

Subaru Safety
Subaru's renowned safety package uses the brand's proven Ring Shaped Frame Reinforcement body structure, which has been shown to excel in the new small overlap test by the Insurance Institute for Highway Safety (IIHS). In the cabin, a driver's knee airbag is added to the roster of safety features that includes front side pelvis/torso airbags and side curtain airbags that offer front and rear outboard seat coverage.

Subaru produces a full line of all-wheel drive sedans, crossovers and SUVs, along with the rear-wheel drive BRZ sports car.

About Subaru of America, Inc. Subaru of America, Inc. is a wholly owned subsidiary of Fuji Heavy Industries Ltd. of Japan. Headquartered in Cherry Hill, N.J., the company markets and distributes Subaru Symmetrical All-Wheel Drive vehicles, parts and accessories through a network of more than 600 dealers across the United States. All Subaru products are manufactured in zero-landfill production plants and Subaru of Indiana Automotive Inc. is the only U.S. automobile production plant to be designated a backyard wildlife habitat by the National Wildlife Federation. For additional information visit www.subaru.com.