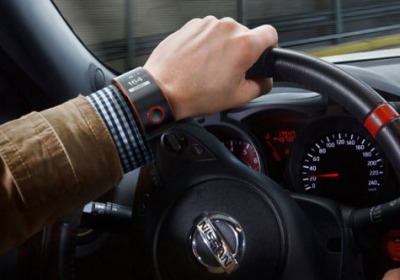 Whether you agree or not, this writer believes that every supercar needs a wristwatch to go with it. Though the Nissan GT-R has been lacking in this one regard, Nissan is keen to correct that wrong. But while most of these automotive-inspired timepieces are decidedly mechanical, Nissan has gone a suitably different direction in creating its new Nismo watch concept.

The electronic smartwatch connects driver, car, watch and phone in a sleek design. The device allows drivers to monitor such parameters as the car's average speed and fuel consumption, access performance telematics on the track, monitor their own heart rate and interface with their smartphone via Bluetooth and a dedicated app. The watch can even tell the driver when it's time to bring his car in for scheduled maintenance, post lap times and such to popular social media platforms, and of course, you know - literally give you the time of day.

Though still in the concept phase, Nissan seems keen to bring this to market, has even gone so far as to design the packaging – made of tire rubber scraped off the track – and done it up in three colors: red, white or black. In the meantime Nismo will be showcasing the smartwatch concept at the Frankfurt show this week, where we hope to get a glimpse up close, but you can delve into the press release and the pair of videos below.

Rolle, Switzerland, 9th September, 2013, PRNewswire – Nissan will become the first car manufacturer to create a smartwatch designed specifically for drivers of Nissan Nismo cars. The Nissan Nismo Concept Watch will be the first smartwatch to connect a driver to the car and will provide drivers with real-time biometric data.

The watch, unveiled today ahead of its display at the Frankfurt Motor Show (10th – 22nd September 2013), is Nissan's first step into wearable technology and epitomises its 'fan first' approach to performance.

The Nissan Nismo Watch will allow drivers to:
- monitor the efficiency of their vehicle with average speed and fuel consumption readings;
- access vehicle telematics and performance data while on track;
- capture biometric data via a heart rate monitor;
- connect to the car using a smartphone app via Bluetooth Low Energy;
- receive tailored car messages from Nissan;

Gareth Dunsmore, Marketing Communications General Manager, Nissan in Europe, commented: "Wearable technology is fast becoming the next big thing and we want to take advantage of this innovative technology to make our Nismo Brand more accessible. On track, Nissan uses the latest biometric training technologies to improve the performance of our Nissan Nismo Athletes and it is this technology we want to bring to our fans to enhance their driving experience and Nismo ownership."

Earlier this year, Nissan launched the Nismo Lab – a bespoke, mobile laboratory that features the latest, advanced biometric training tools such as brainwave technology and JukeRide – a cutting-edge performance analysis tool, that captures live biometric and telematics data from the race cars and Nissan Nismo Athletes during races.

Nismo's vision is to take these digital age technologies and make them available to athletes from other disciplines and to Nissan owners through future wearable tech.

Three key technologies have already identified for future development:
- ECG (Electrocardiogram) – to measure the intervals of the R-R rhythm of the heart, and identify early fatigue;
- EEG (Electroencephalogram) Brainwave – to monitor the drivers' levels of concentration and emotions, and help athletes to get 'In The Zone';
- Skin Temperature – to record core body temperature and hydration levels;

The sleek Nismo Watch will be available in three colours – black, white and the flagship black and red. The watch design was inspired by the Nismo ring and is reflected in a seamless, futuristic and ergonomic design. The simple user interface can be controlled by two buttons and is secured onto the driver's wrist via a simple snap-fit mechanism.

Even the packaging will have a unique n Nismo identity.

Dunsmore concluded: "We have brought the Nismo experience to life in every aspect of the watch, including its packaging, which will be made using tyres and rubber from the racetrack. As Nismo is the performance arm of Nissan, we wanted a way of integrating Nismo's heritage in racing into this futuristic innovation."

The Nismo Watch will use a lithium battery and will be charged by micro-USB, with a battery life of over seven days under normal usage conditions.

About Nissan in Europe

Nissan has one of the most comprehensive European presences of any overseas manufacturer, employing more than 14,500 staff across locally-based design, research & development, manufacturing, logistics and sales & marketing operations. Last year Nissan plants in the UK, Spain and Russia produced more than 695,000 vehicles including mini-MPVs, award-winning crossovers, SUVs and commercial vehicles. Nissan now offers 24 diverse and innovative products for sale in Europe today, and is positioned to become the number one Asian brand in Europe.

Nissan Motor Co., Ltd., Japan's second-largest automotive company, is headquartered in Yokohama, Japan, and is part of the Renault-Nissan Alliance. Operating with more than 267,000 employees globally, Nissan sold more than 4.9 million vehicles and generated revenue of 9.6 trillion yen (USD 116.16 billion) in fiscal year 2012. Nissan delivers a comprehensive range of over 60 models under the Nissan and Infiniti brands. In 2010, Nissan introduced the Nissan LEAF, and continues to lead in zero-emission mobility. The LEAF, the first mass-market, pure-electric vehicle launched globally, is now the best-selling EV in history.