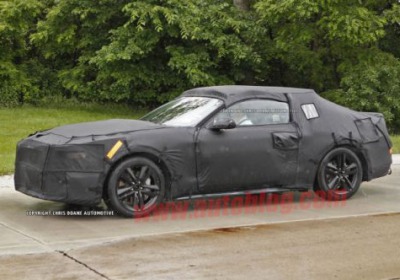 The Ford Mustang is already the lightest of the current crop of muscle cars, at around 3,600 pounds for a GT coupe with the six-speed manual transmission. That's almost 260 pounds less than a Chevrolet Camaro SS and about 450 pounds less than a Dodge Challenger R/T, which means the Mustang has a pretty big advantage when it comes to handling, braking, accelerating and economy. More good news: The next Mustang will be even lighter.

According to a report from Edmunds, the sixth-generation Mustang, which is set to debut at the 2014 North American International Auto Show, will shed an additional 400 pounds of body fat. That 11-percent weight reduction will be thanks to lightweight materials, with a particular focus on using stronger, but less material in construction. Aluminum will feature heavily, but Edmunds' inside source warns that there is "nothing terribly exotic" coming to the original pony car.

The other big news is that the new Mustang will be smaller overall. It's going to be 15-inches shorter than the 188.5-inch Mustang on sale today, while it'll also be 6.5 inches narrower. Shorter overhangs, both in the front and rear, are also good signs for those that want an agile Mustang.

Of course, these improvements aren't going to come cheap. Depending on what sort of equipment is selected, the max price is going to jump about 10 percent according to Edmunds. Still, a bit of extra cash for a lot less weight is a deal we're happy to live with.