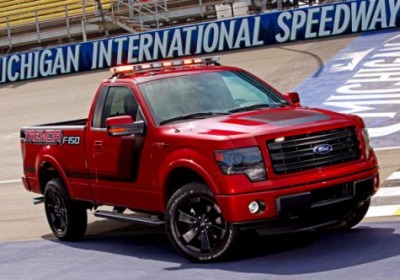 Ford's bro-tastic F-150 Tremor will be pacing this weekend's NASCAR Camping World Truck Series at Michigan International Speedway. The Tremor fills a gap in the Ford F-Series lineup that we imagine the NASCAR set have clamored for - a hot-rod pickup truck.

Where the F-150 Raptor is designed to go quick on anything, the Tremor and its 3.5-liter EcoBoost V6 are designed to tackle the road. The 365-horsepower and 420-pound-foot EcoBoost is unchanged from the rest of the F-150 line, but it combines the shortest drive ratio with the lightest two-door body, making it a bit of hot rod.

Ford will be offering hot laps with Michigan native Brad Keselowski behind the wheel of the Tremor for fans that arrive in the Irish Hills on August 14. The main showing for the new pickup will be the August 17 race, though, when it'll lead the field at the start of the race and through cautions.

The 2014 Ford F-150 Tremor – the first EcoBoost®-powered sport truck – will lead the field to the green flag at the always-fast Michigan International Speedway for the NASCAR Camping World Truck Series Michigan National Guard 200 on Saturday, Aug. 17.

"Michigan International Speedway is one of the fastest tracks on the NASCAR circuit, so the vehicle pacing the field also needs to be fast," said Jamie Allison, director, Ford Racing. "The 2014 Ford F-150 Tremor, with its light-weight configuration, EcoBoost engine and launch-optimized performance, is well-suited for this job."

This 2014 Ford F-150 Tremor's EcoBoost engine is the same powerful powertrain customers can buy – the only major modification to the pace truck is a bank of safety lights mandated by NASCAR. The short-wheelbase, regular-cab Tremor goes on sale this fall delivering distinctive looks and performance.

The all-new truck couples the style of the FX Appearance Package with an EcoBoost engine and a launch-optimized 4.10 rear axle – the shortest final drive ratio offered in an EcoBoost F-150 – to help provide customers with fast acceleration. The FX Appearance Package features stealthy, flat-black accents that include unique 20-inch wheels, stylized bodyside graphics and black badges with red lettering.

365 horsepower at 5,000 rpm on regular fuel
420 lb.-ft. of torque at 2,500 rpm
Twin independent variable camshaft timing for improved performance and fuel economy
An electronic locking rear differential that's standard for both two- and four-wheel-drive versions helps deliver the power to the pavement by improving traction during takeoff.

On Wednesday, Aug. 14, reigning NASCAR Sprint Cup champion Brad Keselowski will drive hot laps with the 2014 Ford F-150 Tremor at Michigan International Speedway. The Rochester Hills, Mich., native is looking to defend his Sprint Cup title in his Ford Fusion
On Thursday, Aug. 15, the F-150 Tremor will be the subject of a live Tremor Talk web chat featuring Brian Bell, F-150 marketing manager, also known as the father of the 2014 Ford F-150 Tremor, co-hosted with Edmunds.com

"We are proud to continue using Ford trucks to pace the field at MIS," said Allison. "Just like last year when we showcased the F-150 FX4, we're using this Michigan race as a platform to promote another one of the outstanding products in the Ford F-150 lineup."