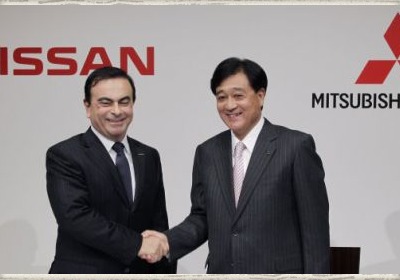 Mitsubishi and Renault-Nissan have just inked an alliance that might, hopefully, reverse the ailing fortunes of the Mitsubishi brand in the US market. The big chunk of news is that Mitsubishi will produce two Renualt-based models for sale in the US market, and that they'll be built at the Renault-Samsung factory in Busan, South Korea.

The plans call for a D-segment sedan to be followed by a C-segment offering. Based on the cars built at the Busan factory, that means Mitsubishi will be getting the SM5 and the SM3, a pair of handsome sedans that are based on Renault-Nissan's D and C platforms, respectively. These same platforms underpin a number of US market Nissans (not to mention a number of cars from Renault), namely the Pathfinder, Maxima, Quest and Murano for the D platform and the last-generation Rogue and Sentra for the C platform.

Besides the sedan production, Nissan and Mitsubishi will be expanding their joint-venture company, NMKV, which produces Kei cars for the Japanese market. A new, all-electric offering will be born from the partnership, likely based on a Kei car platform. The partnership between the three brands will also lead to increased sharing of technology, particularly relating to electric cars.

"Nissan and Mitsubishi Motors have jointly benefited from several collaborations in the past, most recently the successful joint-venture on Kei cars in Japan. I welcome the direction being taken towards this broader cooperation, creating new opportunities for Renault in addition to further leveraging the productive relationship between Nissan and Mitsubishi Motors," said the President and CEO of the Renault-Nissan Alliance, Carlos Ghosn.

Take a look below for the full press release from Renault-Nissan and Mitsubishi.

Amsterdam, Netherlands / Tokyo, Japan (November 5, 2013) – The Renault-Nissan Alliance and Mitsubishi Motors Corporation today announced their joint intention to explore several new projects covering shared products, technologies and manufacturing capacity among the automakers. As a consequence, it has been agreed that the strategic cooperation between Nissan and Mitsubishi Motors could be expanded across the broader Renault-Nissan Alliance.

Between Nissan and Mitsubishi Motors, it is expected that the existing NMKV joint-venture company will be extended to co-develop a new small-segment car including a specific electric version that can be sold on a global basis. The basis for this product will be from a jointly-developed 'Kei car' platform of the type popular in the Japanese domestic market. Further details of all products, markets and manufacturing will be announced separately.

The Renault-Nissan Alliance and Mitsubishi Motors Corporation are also confirming their intention to share technologies and product assets related to electric vehicles and latest-generation platforms. Renault, Nissan and Mitsubishi Motors were among the first to pioneer the introduction of mass-marketed zero emission products.

Based on the current direction of discussions between Renault and Mitsubishi Motors, it is firstly expected that two new sedan models would be launched under the Mitsubishi brand, based on vehicles from the Renault portfolio. Secondary and additional studies around other projects will then be considered.
The first sedan, to compete in the full-size D-segment markets of the United States and Canada and would be manufactured at the Renault-Samsung plant in Busan, South Korea.
The second sedan model would compete in the global C-segment. The manufacturing location for this product is under discussion.
President and CEO of the Renault-Nissan Alliance, Carlos Ghosn said: "Nissan and Mitsubishi Motors have jointly benefited from several collaborations in the past, most recently the successful joint-venture on Kei cars in Japan. I welcome the direction being taken towards this broader cooperation, creating new opportunities for Renault in addition to further leveraging the productive relationship between Nissan and Mitsubishi Motors."

Nissan and Mitsubishi Motors have an existing joint-venture company called NMKV which was established in June 2011 for the purpose of co-developing a range of Kei cars for both brands. The first of these products – the Nissan Dayz and Mitsubishi eK wagon – went on sale in Japan this year. Both products are manufactured at the Mitsubishi Mizushima plant in Japan.

About the Renault-Nissan Alliance
The Renault-Nissan Alliance is a strategic partnership between Renault (based in Boulogne-Billancourt, France) and Nissan (based in Yokohama, Japan), which together sell one in ten cars worldwide. Renault and Nissan have been strategic partners since 1999 and sold 8.1 million cars in nearly 200 countries in 2012. The Alliance operates strategic collaborations with numerous automakers, including Germany's Daimler, China's Dongfeng, and with regional manufacturers such as Ashok Leyland in India.

About Mitsubishi Motors Corporation
Mitsubishi Motors Corporation is a global vehicle manufacturer, selling and servicing wide range of vehicles including minicars, minivans, SUVs, pickup trucks and sedans in more than 160 countries. Mitsubishi Motors is known throughout the world for its engineering prowess in every aspect of automobiles –creating state-of-the-art engine, four-wheel-drive, safety, and now electric vehicle technologies. Mitsubishi Motors launched the zero-emission i-MiEV battery-powered electric vehicle in 2009 as part of a corporate mission to offer consumers more environmentally responsible modes of transportation.
For more information: http://www.mitsubishi-motors.com/en/index.html