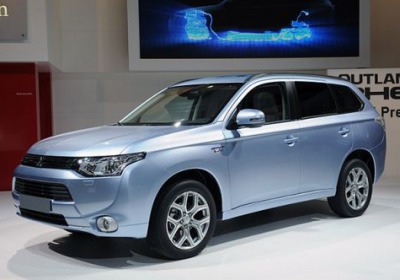 Mitsubishi resumed full-scale battery production in August after a five-month shutdown due to a safety investigation. Supplier Lithium Energy Japan has been delivering 4,000 battery packs each month since September, but that's apparently still not enough to fill the overseas inventory pipeline for the Outlander PHEV and i subcompact EV while launching the Outlander PHEV here in the US. So instead of the previous tentative launch date of Fall 2014, the plug-in hybrid's Stateside on-sale date has been pushed back until 2015.

That's according to Automotive News, which also notes that Mitsubishi has sold 11,300 plug-in Outlanders this year, though that number reflects the production stoppage over the battery issues. As of April, battery supplier LEJ will be able to supply 5,000 packs per month just for the Outlander, but company president Osamu Masuko has gone on record saying that production will have to rise above that in order to make the US launch.

Every Mitsubishi dealer (and hopefully a fair number of consumers) will be looking forward to a crossover that, for the moment, doesn't really have natural rivals. The Outlander PHEV can drive 32 miles on electricity alone, has a top speed of 75 miles per hour in EV mode and offers all-wheel drive with a towing capacity of over 3,000 pounds. The model should get an impressive MPGe rating from the EPA when it finally arrives and it figures to be a bellwether for the plug-in Outlander Sport and Pajero utility vehicles that are expected to arrive after it. Hopefully 2015 will be its year.

See also: Mitsubishi wants to bring a plug-in hybrid Montero to the US, Mitsubishi developing new standalone hybrid Evo successor, Mitsubishi boss says US operations may break even next year.