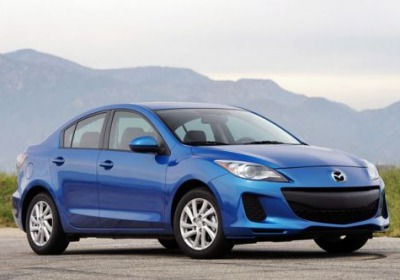 Mazda is on the cusp of unveiling an all-new Mazda3, but the compact will mark an important milestone before that happens. The very first Mazda3 rolled off of the assembly line on June 25, 2003. A decade later, the little car has snagged some 136 awards. The first generation sold 2.2 million units over the span of six years, and the second has smiled its way into the hearts of 1.4 million buyers since 2009. Mazda notes the machine even took the honor of being the top-selling passenger car in Australia in 2011 and 2012.

So, what will the future bring? The Japanese automaker is keeping the details to itself for the moment. From the spy photos we've seen, it looks as if the new design will fall under the company's new Kodo design philosophy. That same language brought us the perilously sexy Mazda6, and the new Mazda3 should be no less attractive. You can check out those photos here.

You can also read the full press release on the compact's 10-year anniversary below.

Leverkusen, 21 June 2013. The future looks bright for the Mazda3 as the company prepares to celebrate next week the tenth birthday of its best-selling model of all time. One decade ago, on 25 June 2003, the very first Mazda3 rolled off the production line in Hofu, Japan. And it has been defying convention ever since, capturing the hearts of drivers the world over and winning 136 awards – so far.

With its fresh combination of design, performance and quality, the initial Mazda3 would revolutionise the C segment around the world. One of Mazda's original Zoom-Zoom generation, the dynamic sports compact was a categorical hit: A total of 2.2 million first-generation Mazda3s found homes.

The next model, which followed in 2009, was designed under the Sustainable Zoom-Zoom umbrella, Mazda's strategy to build increasingly lighter, more fuel efficient and safer vehicles with no compromises to Mazda's patented driving fun and reliability. And the second-generation Mazda3 was certainly exhilarating, with an inspirational sporty look and even further advanced performance and handling, but at the same time more eco-friendly than ever thanks to unique technology like i-stop, the idle-stop system still delivering the world's fastest restarts today.

It set a few safety benchmarks, too, with cutting-edge active safety technology like Rear Vehicle Monitoring*, which received a Euro NCAP Advanced Award and was the first such system whatsoever in the segment, and the Adaptive Front-lighting System*. Consequently, the Mazda3 was given top safety ratings around the globe, including the maximum five-stars from Euro NCAP.

Popularity-wise, the generation two model picked up where the original Mazda3 left off, with some 1.4 million units sold globally to date. It was even the top-selling passenger car overall in Australia in 2011 and 2012. And all along, the Mazda3 maintained the rock-solid dependability synonymous with the brand: It was, for example, the best model overall in J.D. Power's 2011 German customer satisfaction survey after being the number one compact in 2010.

"The Mazda3 has been a huge success for us and is clearly a cornerstone of our model range," says Jeff Guyton, president and CEO Mazda Motor Europe. "We've always aimed to exceed customer expectations with the Mazda3, and plan to continue raising the bar in the ultra-competitive C segment. Here's to another exciting decade."