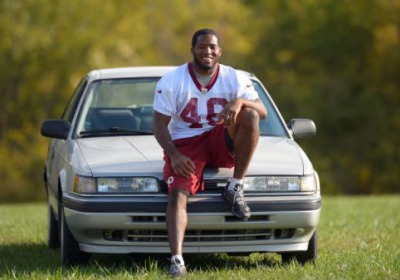 I don't actually care for the Washington Redskins (which is a good thing, considering the start to their season this year), but I love their running back, Alfred Morris. Why? Well, to start with, Morris helped deliver a dominating 10-3 season for my fantasy football team last year after a flash of prescience saw me pick him up off the waiver wire in Week 1 (hit me up on Twitter if you need fantasy sports insight, guys, I'm sort of like the Ruxin of Autoblog).

Morris is also pretty endearing because of his loyalty to his car, Bentley. Hold up – that's not to say the running back has splashed out on a Continental GT or a Flying Spur. No, Morris gave his much-loved 1991 Mazda 626 the tongue-in-cheek name "Bentley" while he was still a student at Florida Atlantic. One 1,613-rushing-yard rookie season and a $2.2-million contract later, and Morris is still using his Mazda as his daily driver. It might be easy to assume that the young player is simply being really prudent with all of his newfound wealth, but the guy really just has a thing for his five-speed-manual 626.

And Mazda, of course, loves the story of Morris' affection. In an effort to keep his 626 running strong and looking good, the company's Washington D.C.-area dealers have agreed to refurbish Bentley back to its original showroom freshness. Rather than spoil the classic (?) lines of the 626, the Mazda folks are essentially restoring the car for Morris. The cracked dash will be swapped out for a factory replacement, the engine and transmission given a thorough going-over and the whole vehicle generally made as fresh as Will Smith circa 1991. Bentley is expected to be completed and rolling through the capitol city by October 15, and in the meantime, Morris has been driving around in a new 2014 Mazda6 loaner car.

WHAT: Washington, D.C.-area Mazda Dealers will present Alfred Morris with his refurbished Mazda 626. On July 22nd, Alfred dropped off his beloved 1991 Mazda 626, affectionately named "Bentley," to be brought back to factory new condition. Alfred will see his "new" car for the first time on October 15th. While his car has been in the shop, Alfred has been enjoying driving a 2014 Mazda6 around town and to and from Redskins practice and games.

Bucking convention, Morris continues to depend on "Bentley" as his daily car, even though he is a starting running back.