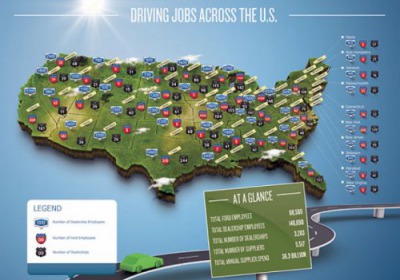 Ford is on a roll this year, with excellent quarterly earnings and better-than-expected vehicle sales leading to 800 more job opportunities with the Blue Oval. In January, Ford announced that it wanted to hire 2,200 salaried employees, but, since then, that figure has been revised to 3,000, representing a 36-percent increase over original projections. About 1,500 of those jobs remain, 80 percent of which are technical professional positions.

"Engineers and technical professionals are in as much demand as our cars, trucks and SUVs," says Felicia Fields, Ford Group Vice President for Human Resources. Helping to spur this job growth are increasing market share on both the West and East Coast and robust demand for the Ford Escape and F-150.

To find job candidates, Ford is reaching out to them via Facebook, Twitter and LinkedIn, in addition to the company's corporate career site. The Blue Oval is also ramping up its presence on college campuses.

One of Fords goals has been to create 12,000 hourly jobs in the US by 2015, and this latest announcement does alter that goal, Ford says, which is sitting the 75-percent mark since the company hired over 6,200 hourly employees last year. Learn more in the press release below.

- Ford will hire 3,000 salaried employees – 800 more than previously expected – this year to continue its product momentum and new growth

- Of the 3,000 new hires, 80 percent will be technical professionals to meet demand for new skills; 85 to 90 percent will be in Michigan, with the remaining positions at Ford locations throughout the United States


DEARBORN, Mich., July 23, 2013 – Ford Motor Company will hire an additional 800 salaried employees for a total of more than 3,000 salaried employees in 2013. The new hiring represents a 36 percent increase over the original projection of 2,200 additional salaried jobs announced in January. With only a 2.7 percent attrition rate, the majority of these jobs are new.

This salaried hiring initiative is the largest since 2000, and is necessary for Ford to meet surging demand for its products and continue its aggressive global growth. Ford's U.S. market share is up almost a full percentage point from last year, and the company reported its best June sales since 2006, fueled by share gains on the east and west coasts and surging demand for Ford Escape and Ford F-150.

Of the 3,000 new jobs, 2,400 will be technical professionals who will work in product development, manufacturing, quality, purchasing and information technology. Ford is halfway to its goal of hiring the 3,000 salaried employees this year. Felicia Fields, Ford group vice president for human resources, says the company is still looking for people who are "interested in working for a diverse global leader in a huge growth mode" to fill the more than 1,500 positions that remain.

While the 3,000 jobs will be based in the U.S., many of these positions will have a global impact as Ford continues to expand around the world to meet surging demand for its cars, trucks and SUVs. In addition to the 3,000 salaried jobs, Ford hired 1,850 salaried workers last year in the U.S.

"We created the campaign to align with Ford's global brand promise and highlight that when you join Ford you will become part of a team already leading the way in imagination and creation," says Fields. "We want a fresh and innovative image that reflects Ford and what we stand for."


The new initiative will engage job candidates on the three major social sites the company uses for recruiting – Facebook, Twitter and LinkedIn, as well as the corporate careers website.

"The type of talent we want at Ford are often searching for and evaluating potential employers on social media sites, so expanding our recruiting efforts on these channels ensures we have a strong presence throughout their selection process," says Fields.

In addition to the all-new social media campaign, Ford also is increasing its presence on college campuses.

"Our salaried hires are matching the growth we have seen on the hourly side," says Fields. "Ford is very much in a job creation mode right now."

Added to these salaried hires, Ford announced in April it was hiring an additional 2,000 hourly employees at Kansas City Assembly Plant to ensure supply matches demand for the company's F-150 truck. Last year, Ford announced it would hire more than 6,200 hourly employees across the U.S. to increase capacity to meet demand for its new products. With these latest hourly announcements, Ford has reached 75 percent of its goal to create 12,000 hourly jobs in the U.S. by 2015.

"Our message to job candidates is really simple: Bring your talents to Ford and help us build an even greater future," says Fields.

Information regarding open salaried positions and Ford's hiring process can be found at www.careers.ford.com.