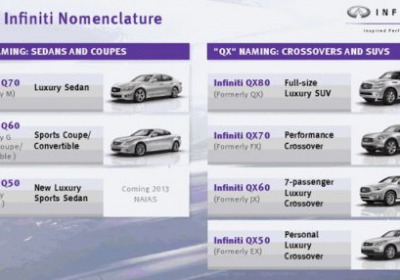 Infiniti caused quite a stir this week when it announced that it would be changing its vehicle names so that all of its cars start with Q and all of its crossovers and SUVs start with QX. Many displeased fans and owners took to social media to voice their opinions, and Johan de Nysschen, the new Infiniti boss, responded today with a Facebook post of his own.

In the note, de Nysschen talks about the challenge of product expansions with alphanumeric names that allow for flexibility without encroaching on the trademarked names of other automakers, although we're sure de Nysschen's former colleagues at Audi aren't looking forward to a Q30 or Q50. He also says that as Infiniti grows to become a global brand, the new naming structure – which closely mimics Volvo – is also designed to reduce confusion (just don't tell that to current owners). One thing that de Nysschen assured wouldn't happen is a confusing "X" added to the end of all-wheel-drive model names that would result in names like the Q60X or, even worse, the QX50X.

While we are not looking forward to relearning Infiniti's product lineup, de Nysschen has given us something to look forward to courtesy of a new performance sedan. From the brief explanation of this car, which was used as a key example in explaining the validity of the new names, we learned that the new model will be a performance version of what is now the M sedan, and it will be powered by a "charged induction" 3.0-liter V6 producing more than 550 horsepower. The M's name will become the Q70, but as of right now, it isn't clear if this will be an IPL model or something else.

We love you dearly. And we know you love the brand. Which means it's only natural that you may feel surprised by the announcement that we plan to change our nomenclature philosophy. No one likes change.

It was a tough decision, we like our current model names as much as you do. But we had no choice but to change. Let me explain.

1. We are embarking on a massive product offensive, and these new cars need names. There are no suitable combinations of Alphanumeric naming options remaining which are not already trademarked by another automaker. In order to expand our line up with the fascinating new models we are developing, we must create a more flexible nomenclature philosophy.

2. Our new advanced technology engines under development will be smaller, lighter, more fuel efficient yet more powerful. And we will introduce some exhilarating performance machines in the future. I'm sure you will agree, it would be a bit odd to have a powerful, luxurious and refined V8 powered Infiniti M56, then position a new high-tech 550+ horsepower performance flagship for the Infiniti M range above it, using a potent charged induction V6, but then call it Infiniti M30, which we would be obliged to do, following our current naming logic.

3. Infiniti is becoming a global brand now, we are already active in almost 50 countries, the majority only very recently. Our new customers are unfamiliar with the brand and struggle to understand our range hierarchy. Is a JX above or below an FX? Where does an EX fit? What is the relationship between G and Infiniti M? Research confirms the majority of newcomers to our brand consider the naming to be somewhat arbitrary and confusing.

So the solution is pretty straightforward - use Q for cars, QX for crossovers, and double digits in increments of ten, to denote hierarchy, linked to the price point of the model, not size and not engine displacement. And no, we won't call all-wheel drive models Q50X or QX50X. The fact that a model may feature four wheel drive, will be indicated by specific badging describing this feature on the car, and is not part of the model name.

The really exciting implication of all this, is that it prepares the way for the introduction of several fascinating new models, above and below the current line up, a wider range of powertrains, including some truly stunning performance cars in our future.

So there is only good news for all Infiniti fans around the globe. We are working very hard to bring you great products, a great brand and a compelling ownership experience. And we are really confident you will love the new Q50. It's simply that good.