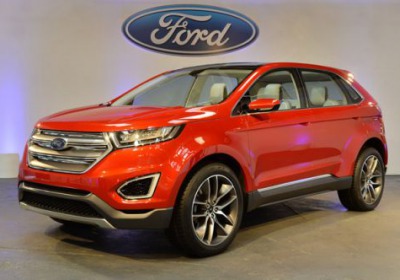 While most of us believe that small, fuel efficient cars are the key to global expansion for US automakers, Jim Farley, Ford's vice president of Global Marketing, thinks otherwise. Last week, we attended an exclusive sneak preview of the Ford Edge Concept in advance of the Los Angeles Auto Show, and Farley told us that it's actually utility vehicles that will help the Blue Oval gain market share overseas. "There is no other segment in our industry that is growing like utilities," he said. "We expect over the next five years this full family of [utility] vehicles to really drive our growth as a company."

And Farley has the numbers to back it up, too. Ford projects overall automotive sales to grow 23 percent from 2012 to 2017, but the company's utility vehicles are expected to boom by an impressive 41 percent during that same period. Much of that growth will be in China, where Ford estimates its utility sales will explode. "The biggest opportunity for us globally for utilities is in China," Farley said. "China utility growth is expected to more than double from where it is today to 2017, which isn't that far away." Most astounding is that Ford projects its own utility sales in China will eventually increase by more than 2,000 percent when smaller crossovers, such as the EcoSport and Kuga (sold as the Escape in North America), and the Edge and Explorer, are factored in.

Ford's VP also expects utilities to lead the way in the struggling European market. "With all the difficulties of the European market, there is one segment that has actually expanded in volume over the last several years even though the market is way down, and that's utilities," Farley told us. Ford estimates that their utility sales will grow 65 percent in Europe from 2012-2017. "The utility segment is projected to grow we think about thirty percent between now and 2017 in Europe, and we think we are going to grow twice that rate as a brand," Farley continued.

To achieve these goals, Ford will be globalizing their utility lineup just like they have been with their passenger cars. The EcoSport, which was previously only available in South America, has been launched in China along with the Escape. The EcoSport and Edge will also be making their way to Europe to join the second generation Kuga.