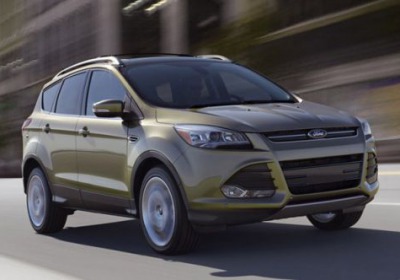 Recalls happen. Automakers hope they won't, but they do. And that's alright, for the most part, because cars are designed (and to a large degree still made) by humans, and humans make mistakes. So we forgive them, as long as the problem is resolved. Only in the case of the Ford Escape, the problem seems to keep coming back.

That's why Ford is calling in the Escape yet again due to fire concerns. The issue revolves around problematic fuel lines in 9,469 units manufactured between October 5, 2011, and July 11, 2012, all of which use the 1.6-liter EcoBoost inline four-cylinder engine.

As you yourself may recall, the Escape was subject to a string of recalls last year that resulted in a $17 million fine. One of them was over this very same issue, which Ford apparently didn't rectify the first time around. Let's hope this time is the last time.

SUMMARY:
Ford Motor Company (Ford) is recalling certain model year 2013 Escape vehicles manufactured from October 5, 2011, through July 11, 2012, and equipped with a 1.6L engine subject to prior safety recall NHTSA 12V-336. In some cases, the engine compartment fuel line may have been installed incorrectly when repaired under the prior recall. The misinstalled fuel line could chafe and eventually leak fuel.

REMEDY:
Ford will notify owners and dealers will inspect the engine compartment fuel line, and if necessary, replace it, free of charge. The recall is expected to begin by January 23, 2014. Owners may contact Ford at 1-866-436-7332. Ford's recall number is 13S12.

NOTES:
This recall is in addition to NHTSA recall 12V-336. All covered vehicles, regardless of being remedied under the earlier recall, require an inspection and a remedy for this campaign. Owners may also contact the National Highway Traffic Safety Administration Vehicle Safety Hotline at 1-888-327-4236 (TTY 1-800-424-9153), or go to www.safercar.gov.