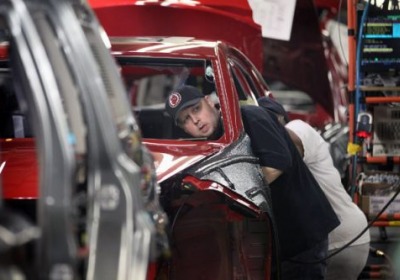 Most domestic automaker assembly plants traditionally take a couple of weeks off during the summer. The shutdowns give each plant time for much needed repairs and maintenance, and in some cases, help better align production with demand. Not this year, though, as demand for many models is outstripping what Ford, Chrysler and General Motors plants can produce.

Ford has announced that it will shorten its annual summer shutdown for most North American plants from two weeks to one. The shorter shutdown will increase the carmaker's annual North American production by 40,000 units on top of the 200,000 extra units that it was already planning to produce this year versus last. Automotive News reports that Ford produced 2.8 million vehicles on this continent in 2012, and that output this year has already increased 13 percent through April.

Chrysler, meanwhile, is also operating at full tilt and plans to run some plants through the summer with no shutdown at all. Those not getting a break include Jefferson North where the Jeep Grand Cherokee and Dodge Durango are assembled, Toledo North that will assemble the new Cherokee, and Conner Avenue, home of SRT Viper production. Other assembly plants will be down for a single week, while all of Chrysler's engine and transmission plants except one in Indiana will continue operating with no shutdown this summer.

Lastly, GM is keeping its cards closer to its chest. The automaker declined to comment to Automotive News about its summer production plans, instead saying that the company "does things a bit differently" now compared to the past, tying plant shutdowns to model life cycles and market demand rather than traditional annual timetables.

- Ford will shorten its summer shutdown from the traditional two weeks to one week for a majority of North American assembly plants, increasing production by an extra 40,000 units

- This year Ford plans to add close to 3,500 hourly jobs to meet customer demand for the company's best-selling vehicles

DEARBORN, Mich., May 22, 2013 – Ford Motor Company will add an additional 200,000 units of annual straight-time capacity this year. In addition, Ford will produce an extra 40,000 units by idling select plants for only one week during what has been the traditional two-week summer shutdown.

"To meet surging customer demand for our top-selling cars, utilities and trucks, we are continuing to run our North American facilities at full manned capacity, and we will add 200,000 units of annual straight-time capacity this year," said Jim Tetreault, vice president of North America Manufacturing. "Approximately 75 percent of our plants are running at a three-crew, three-shift or four-crew pattern in order to ensure we're getting more of our products into dealerships."

Other plants taking a reduced summer shutdown in 2013 include:

This is the second year in a row Ford has taken the action in order to meet strong demand for its products.

To meet demand for Ford vehicles, the company will add nearly 3,500 hourly jobs in 2013. With its latest announcement of more than 2,000 new jobs at Kansas City Assembly Plant, as well as more than 1,400 new jobs at Flat Rock Assembly Plant, Ford is three-quarters of the way to its plan to create 12,000 hourly jobs in the United States by 2015. The company hired more than 8,000 salaried and hourly employees in the U.S. last year.

Ford will announce its third quarter North American production guidance on June 3 during the May U.S. sales call. The production guidance will include the effect of the additional 200,000 units of annual straight-time capacity and the shortened summer plant shutdown schedule. The increased production already has been assumed in the financial guidance the company reconfirmed during its first quarter earnings report on April 24.