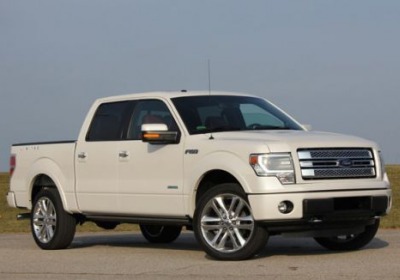 According to Automotive News, the National Highway Traffic Safety Administration is launching a probe into 400,000 Ford F-150 models over possible acceleration problems. According to the article, NHTSA has received 95 reports "alleging incidents of reduced engine power during hard accelerations" on 2011 to 2013 F-150 models equipped with the company's 3.5-liter EcoBoost V6 engine.

Automotive News reports that Ford has issued three technical service bulletins "related to intermittent stumble/misfire on acceleration from highway cruise in humid or damp conditions," according to the government agency's documents. About one third of the 95 reports NHTSA has received cited humid or rainy conditions when these problems allegedly occurred.

These technical service bulletins have allowed dealers to address a "condition related to moisture accumulation in the charge air cooler during extended highway cruising at constant throttle in humid or damp conditions," AN reports, citing NHTSA documents. Furthermore, the TSB outlines details for "reprogramming the powertrain control module with the latest calibration and installing a new CAC and air deflector plate."

A Ford spokesperson told Automotive News that the company "will cooperate with the NHTSA investigation, as we always do."

Ford was recently involved in a bit of lawsuit trouble regarding its 3.5-liter EcoBoost V6, where plaintiffs in Ohio claimed that the engine "contained serious latent design, manufacturing, or assembly defects." One of those alleged defects was that the engine could lose power quickly, which could certainly be related to this NHTSA probe.