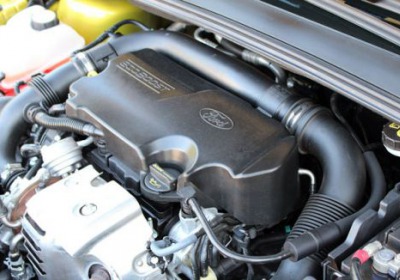 Soon enough, Ford will offer its 1.0-liter EcoBoost three-cylinder engine under the hood of the Fiesta here in the United States, building on the success of the small powerplant overseas. In fact, this success has caused other automakers to take notice, and according to Automotive News Europe, Daimler is now talking to Ford about this engine for use in its own products.

In other markets, Ford offers the 1.0-liter mill under the hood of the Focus (we had the chance to sample this package on our home turf), as well as the B-Max MPV. For this new collaboration, Daimler would use the turbo-three in the next-generation Smart ForTwo, as well as the Renault Twingo, which the German automaker will be collaborating on as part of its alliance with Renault-Nissan. Speaking to AN, a Mercedes-Benz engineer called the 1.0-liter mill an "interesting and impressive engine."

In exchange for details about the EcoBoost inline-three, Daimler will supply Ford with information regarding its Euro6 stratified lean-burn gasoline engine, which is found in the new E-Class sedan.

This isn't the first time Ford has collaborated with Daimler and Renault-Nissan about powertrain development. Earlier this year, the companies said they would all work together on hydrogen fuel cell development, with a plan to introduce a hydrogen powertrain by 2017.