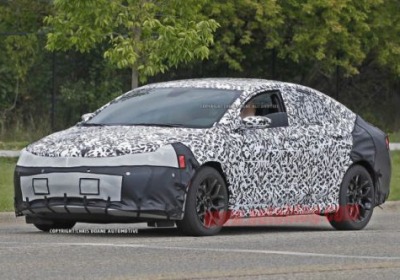 Chrysler is deep into testing for its next-generation 200 sedan, a new model that is utterly essential to the brand's continued health. The next iteration is tasked with wiping away anything reminiscent of the Sebring, which the current 200 is still based on. According to our spy, this is one of the first of the new 200s to wear a production body rather than the Alfa Romeo Giulietta-based mules that are thick on the ground in Auburn Hills.

Immediately apparent is that the new 200 ditches the awkwardly styled C-pillar that's typified four-door 200 sedans (and Sebrings before them) for years. The new, sleeker roofline is almost more of a four-door coupe than a traditional sedan, which hints that this new car will try to be more fashion-forward than its predecessor. The rear deck is set off by a sporty decklid spoiler, while a set of staggered rectangular exhaust pipes poke out of the bumper.

The front end appears sleeker, and we'd be lying if we didn't spy a bit of Dart through the camouflage, particularly with the headlights. A large, gaping lower air intake is visible, although our spy seems to think it'll shrink before production models debut. Whatever the new 200 ends up looking like, we expect to see a lot more of its styling from Chrysler in the coming years.

Under the hood will likely be the same pair of engines found in the Jeep Cherokee - a 2.4-liter, Tigershark four-cylinder and the 3.2-liter, Pentastar V6. Chrysler Group's new nine-speed automatic is expected to harness power across the engine range. Fuel efficiency, not surprisingly, will be paramount, with active grille shutters to improve the aerodynamics.

Production for the next-generation 200 is expected to start in February or March, with a January debut at the 2013 North American International Auto Show.

See also: Chrysler IPO to be filed as early as this week, Dodge not being dropped by Chrysler, CEO reaffirms, Chrysler celebrates 30 years of minivans with special editions.