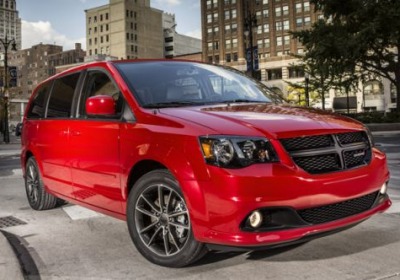 It's been known by many names: the Chrysler Town & Country, Dodge Caravan, Plymouth Voyager, Chrysler Voyager, Lancia Voyager, Volkswagen Routan, Ram Cargo Van... but the bottom line is that Chrysler's minivans have defined the segment for 30 years now. In fact, Chrysler says it has sold 13 million of them since 1983, helped along by the Chrysler Town & Country and Dodge Grand Caravan that accounted for nearly half of all minivans sold in the United States just last year. So to celebrate this three-decade milestone, the Auburn Hills auto has announced a pair of new special editions.

The 2014 Chrysler Town & Country 30th Anniversary Edition starts the Touring-L trim and includes such special touches as 17-inch wheels, unique badging, available Granite Crystal Pearl paint and an interior decked out in black Alcantara and Nappa leather, piano black trim and all the optional bells and whistles bundled in.

The 2014 Dodge Grand Caravan 30th Anniversary Edition, meanwhile, starts off with either the SE or SXT trims and also upgrades with 17-inch alloys as well as color-keyed mirrors and an interior with silver stitching, piano black trim, power everything, and of course, those special badges.

Both versions are powered by the same 3.6-liter Pentastar V6 with 283 horsepower and a six-speed automatic transmission. Scope out the press release below and our full image galleries for a closer look at what sets these celebratory specials apart.

- Chrysler Town & Country and Dodge Grand Caravan to feature special 30th Anniversary Editions
- With more than 13 million Chrysler Town & Country and Dodge Grand Caravan minivans sold since 1983, Chrysler Group tops the segment, selling twice as many minivans as any other manufacturer over the past 30 years
- The creator of the minivan segment, Chrysler Group has innovated 78 minivan firsts since 1983, including class-exclusive Stow 'n Go seating and segment leading Blu-Ray rear-seat entertainment system
- Company is celebrating this milestone with new 30th Anniversary Editions that will feature unique content, such as commemorative badging, special paint and black interior trim

September 3, 2013 , Auburn Hills, Mich. - It's one thing to create an entirely new segment. To be an innovation leader in that segment for 30 years running is quite another accomplishment. Having sold more than 13 million minivans since first introducing the segment in 1983, and creating 78 minivan segment firsts, such as class-exclusive Stow 'n Go seating and a segment-first Blu-ray rear-seat entertainment system, the Chrysler Town & Country and Dodge Grand Caravan are celebrating their heritage with 30th Anniversary Editions available this fall.

"The Chrysler Group is well known as the creator of the minivan, and these 30th Anniversary Editions are the perfect way to celebrate their leadership and longevity in the marketplace," said Ben Winter, Vice president of Vehicle Engineering. "As the minivan segment and innovation leader, it's important that we continue to offer tremendous content and value, setting us apart from the rest of the segment."

The first Chrysler Group minivan rolled off the Windsor Assembly line on November 2, 1983, sparking a new segment of people movers that rose in popularity very quickly, transporting millions of moms, dads and kids, and becoming part of their families. Even after 30 years, the Chrysler Group continues to lead the segment. The Dodge Grand Caravan was the top selling minivan in the world last year and combined with the Chrysler Town & Country, accounted for nearly half of all minivan sales in the United States in 2012.

The Chrysler Town & Country and Dodge Grand Caravan are built at the Windsor Assembly Plant in Windsor, Ontario, Canada.

About the Chrysler Brand
The Chrysler brand has delighted customers with distinctive designs, craftsmanship, intuitive innovation and technology all at an extraordinary value since the company was founded in 1926.

The world-class interior of the Chrysler Town & Country minivan is beautifully crafted with high-quality materials that are soft to the touch, and offers tech-savvy entertainment features and smart storage and seating options including Stow 'n Go® seating with one-touch fold-down function, dual DVD entertainment system, navigation and SIRIUSXM satellite radio with Travel Link making the Chrysler Town & Country the ultimate family vehicle. A 3.6-liter Pentastar V-6 engine is a "Ward's 10 Best Engine" and produces a best-in-class 283 horsepower and is mated to a six-speed automatic transmission with a fuel economizer mode. Town & Country achieves 17 miles per gallon in the city, 25 on the highway.

The Chrysler brand's succession of innovative product introductions continues to solidify the brand's standing as the leader in design, engineering and value. The premium for the Chrysler brand is in the product, not the price.

About the Dodge Brand
For nearly 100 years, Dodge has defined passionate and innovative vehicles that stand apart in performance and in style. Building upon its rich heritage of muscle cars, racing technology and ingenious engineering, Dodge offers a full-line of cars, crossovers, minivans and SUVs built for top performance – from power off the line and handling in the corners, to high-quality vehicles that deliver unmatched versatility and excellent fuel efficiency. Only Dodge offers such innovative functionality combined with class-leading performance, exceptional value and distinctive design. With the all-new 2013 Dodge Dart, the all-new Dodge Charger paired with the ZF eight-speed transmission that achieves a class-leading 31 miles per gallon on the highway, the new Durango and the significantly revamped Grand Caravan – inventor of the minivan – Journey, Avenger and iconic Challenger, Dodge now has one of the youngest dealer showrooms in the United States.

The 2014 Dodge Grand Caravan – America's best-selling minivan - continues to innovate in the segment it created and offers an unprecedented level of functionality, convenience, safety and value. With a starting U.S. Manufacturer's Suggested Retail Price (MSRP) of $19,995 (excluding destination), the Dodge Grand Caravan is the most affordable seven-passenger vehicle in the United States. Its standard, award-winning Pentastar 3.6-liter V6 engine delivers best-in-class 283 horsepower and tow rating of 3,600 lbs. Grand Caravan features a segment-exclusive fuel economizer mode and gets up to 25 miles per gallon, or up to 500 miles driving range. This IIHS Top Safety Pick also has more than 45 safety, security and technology features, and a 5-year/100,000-mile powertrain warranty.